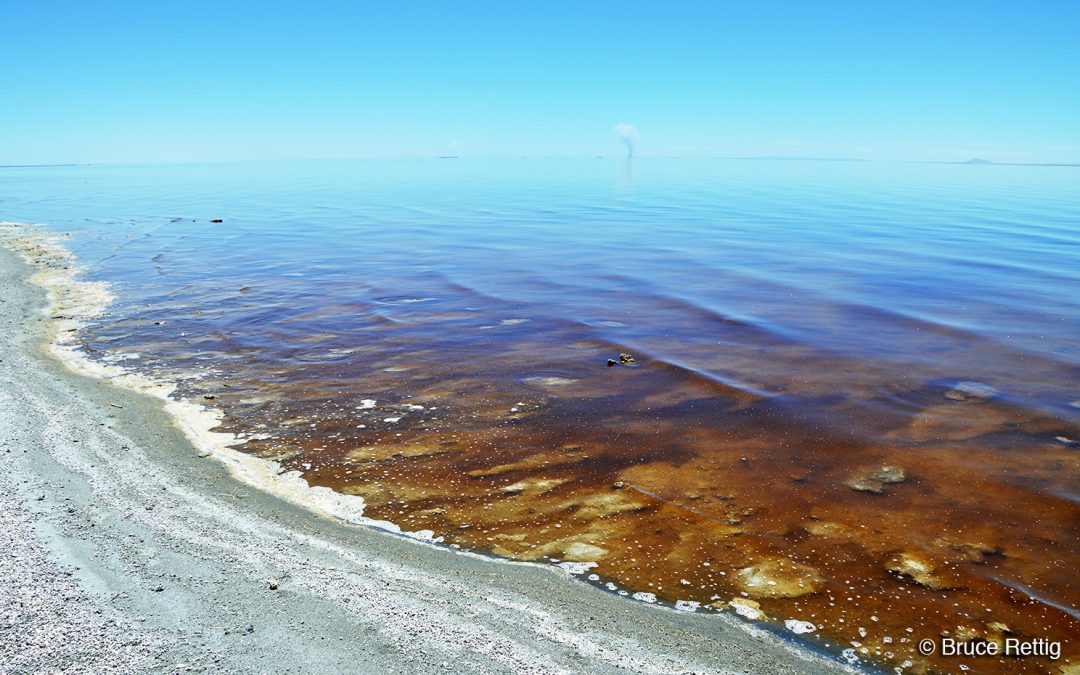 The dying lake faded into an eerie haze as we stood atop a layer of sun-bleached fish carcasses. The lack of wind and numbing silence only added to the surreal feeling of standing at the edge of the world, teetering toward an apocalyptic end of days. The springtime road trip had brought my son and I to witness the continuing demise of the Salton Sea. With a surface area of 240,000 acres, it’s officially recognized as California’s largest lake, nearly double the size of Lake Tahoe in coverage (in terms of volume, Tahoe is the larger of the two lakes.) This brackish body of water extends into both the Coachella and Imperial valleys of California.

For thousands of years, the Colorado River flowed in and out of the Imperial Valley, alternately creating a freshwater lake, an increasingly saline lake, and a dry desert basin—the cycles dependent upon river flow and evaporation. The Salton Sea’s accidental manmade birth occurred in 1905. In an effort to increase water resources into the area for farming, irrigation canals were dug that linked the Colorado River to the valley. As silt built up in the canals, a cut was made in the bank of the Colorado River to further increase waterflow. When an unexpected gain in volume breached one of the canals, the river flowed into the Salton Basin for two years, filling the historic dry lake bed and creating the present water body.

For a time, the area was marketed as the California version of the “French Riviera.” The strange sea in the middle of the desert turned into a highly successful oasis resort. Before it was destroyed by flooding (by the very sea itself), Bombay Beach was meant to be a playground for rich vacationers in the 1940s and ’50s. And then the sea began to die.

Understanding the Salton Sea, and efforts to save it from a slow death, is a complicated task. Today, small creeks, drainage systems, sewage, and agricultural runoff are the only sources of inflow. The result is a body of water that is now more saline than the Pacific Ocean. Tilapia and pupfish survive in the water, and more than 400 bird species visit the area on their Pacific Flyway migrations. But a huge fish die-off occurs every year, and more recently, waterfowl die-offs have resulted from increasingly poisonous waters. As the lake continues to recede the situation will only get worse, and migrating waterfowl will have no other place to turn to.

Many of the buildings around the Salton Sea are abandoned, and the few residents that hang on mostly live in house trailers, sheltered from the blazing desert sun. Several attempts to save the lake have failed in the past, including a push by Sonny Bono (yes, the same Sonny of “Sonny & Cher”). When serving as a U.S. Representative, Sonny’s Salton Sea restoration efforts were gaining momentum up until his fatal skiing accident at Heavenly Ski Resort. The State of California has since been involved in several efforts to restore the sea, but none have come to fruition.

Increasing concerns include a future where waters eventually evaporate completely, turning the area into a giant dust bowl. Prevailing winds would blow toxic silt across Palm Springs, and maybe into San Diego. Local residents already suffer from asthma and other chronic ailments due to increasing dust.

We walked away from the Salton Sea with a feeling of emptiness, turning our backs to a place where not only the water continued to evaporate into the desert sky.

To learn more about the Salton Sea, the documentary “Plagues & Pleasures on the Salton Sea” is available for free on YouTube. This insightful look into the plight of this area is narrated by John Waters.

My next post will feature obscure places of interest near the Salton Sea, including “Slab City” and “Salvation Mountain.” 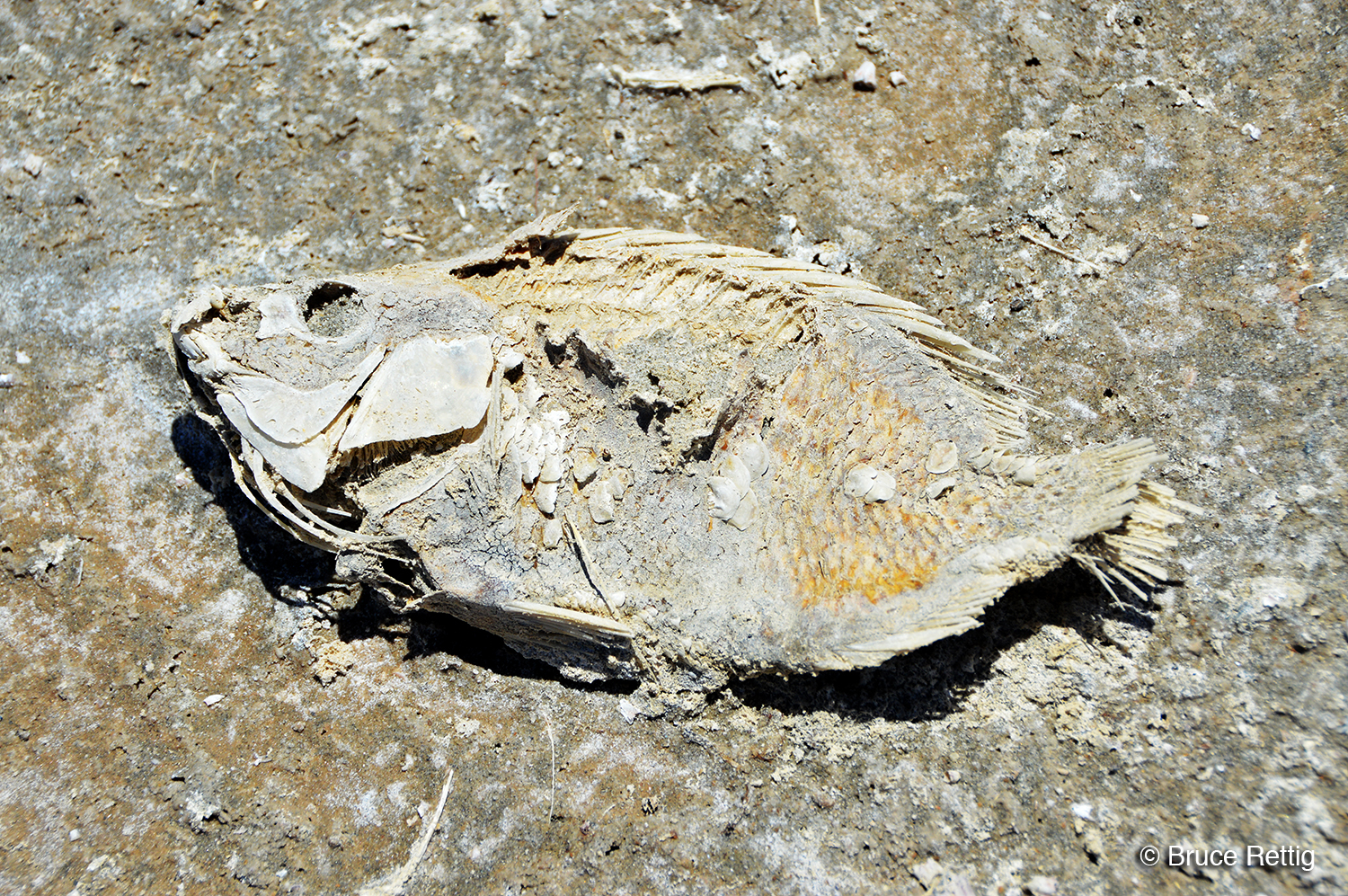 Tilapia die-offs are a seasonal occurrence. 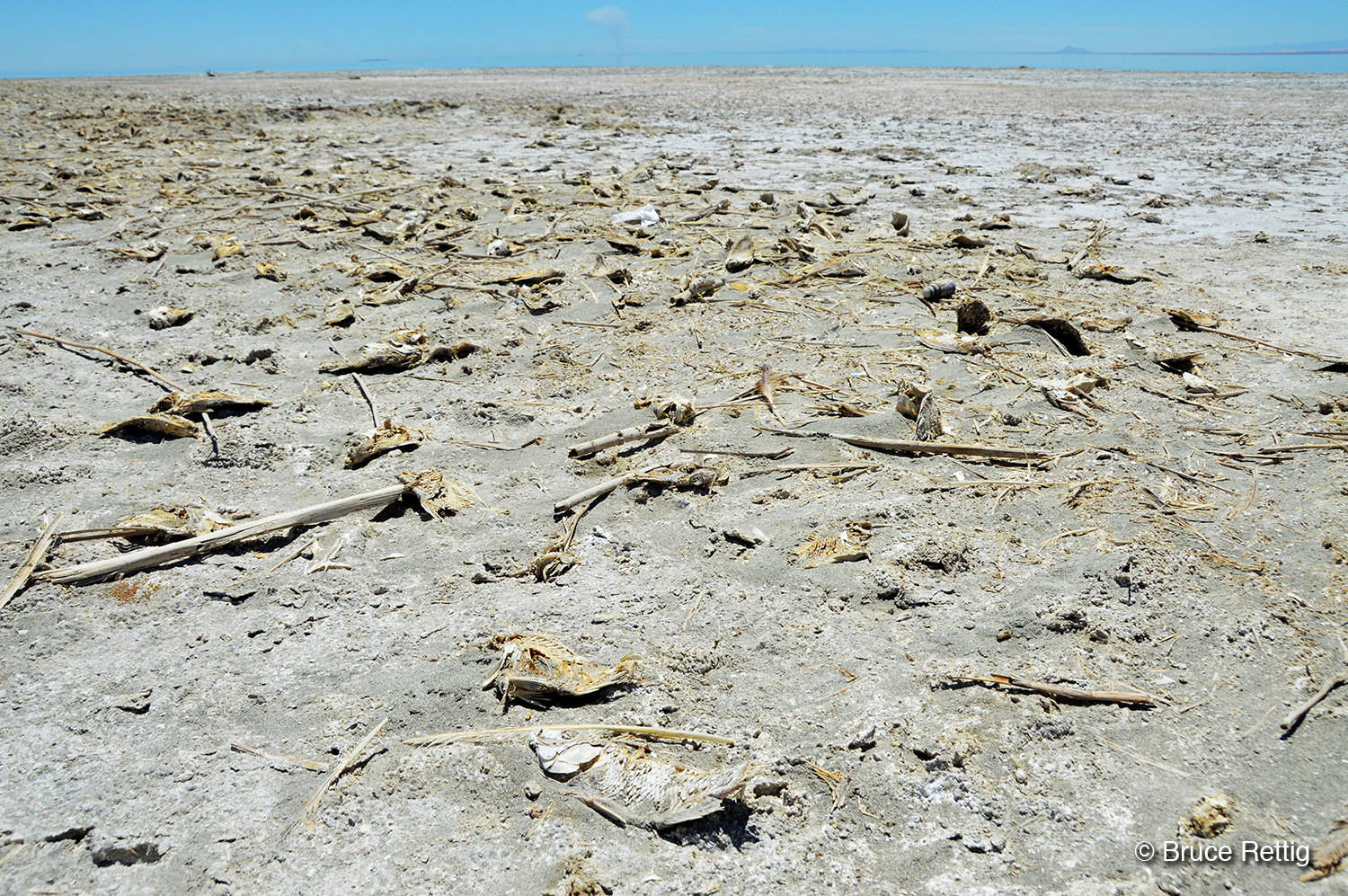 A shoreline of fish carcasses. 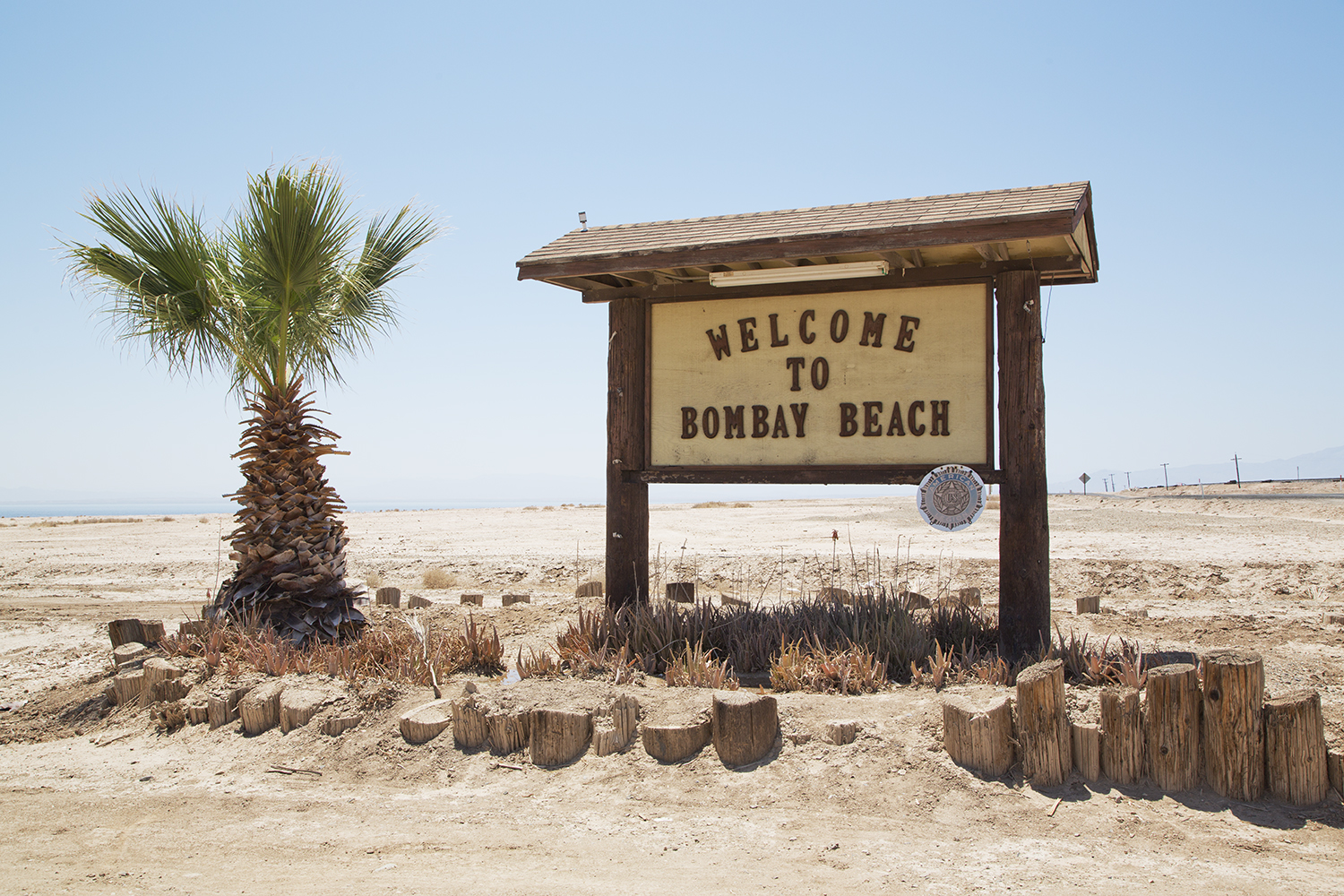 Not a lot of beach parties when we visited . . . 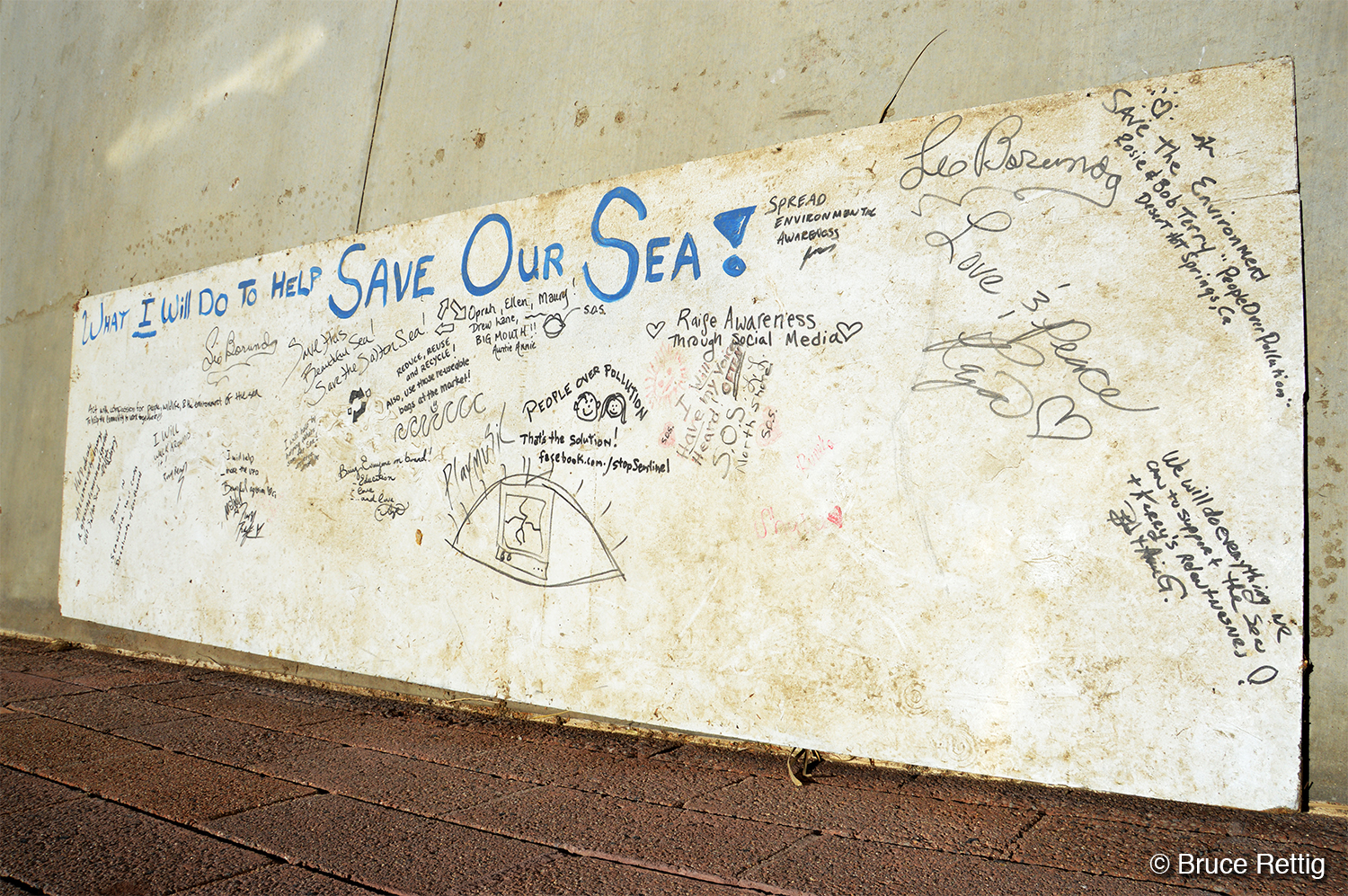 This sign was leaning against the old resort at Bombay Beach. 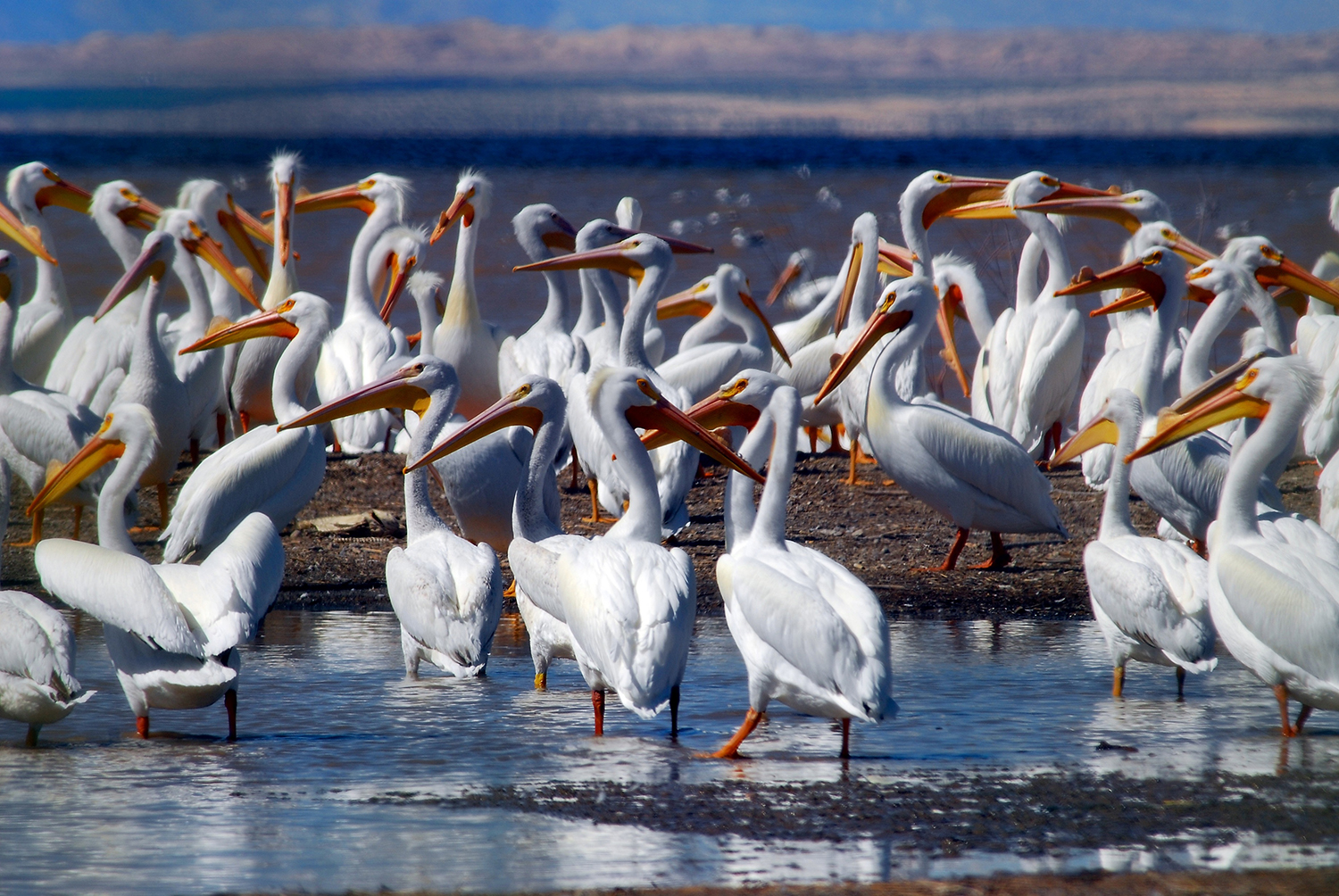 Aerial view of the Salton Sea.