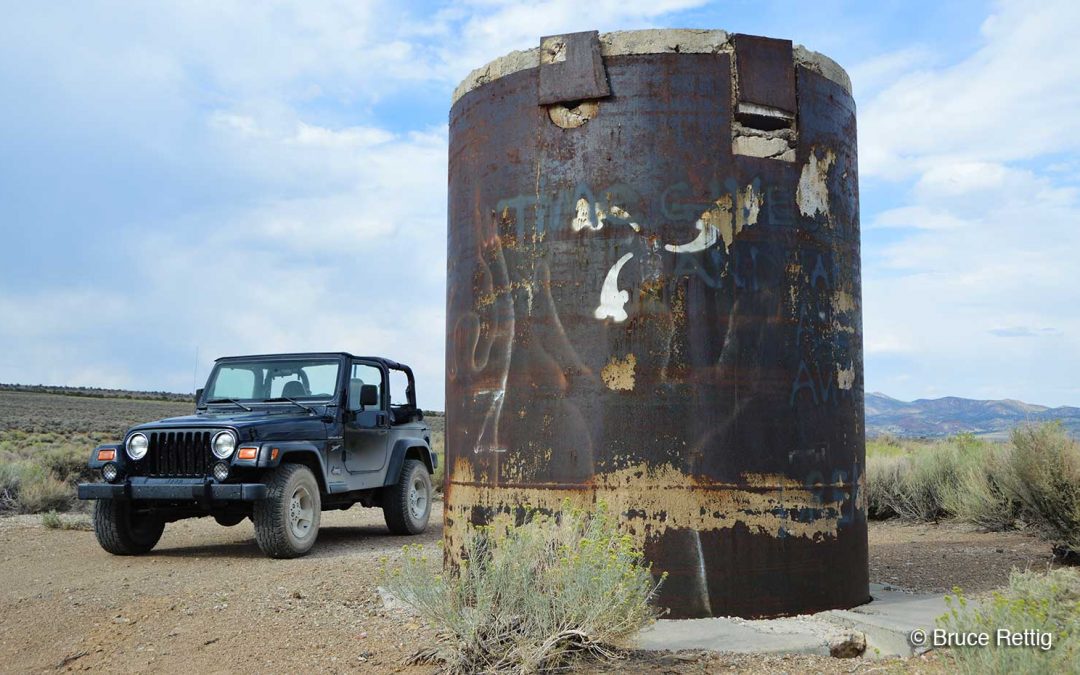 The road disappeared into a ragged scar stretching across the desert floor. My daughter held the GPS, guiding our way as the Jeep shuddered across a washboard gravel road. We had whimsically named the waypoint on the GPS, “Nuke Plug.” After crossing the fault line, and several red and white signs warning of “petroleum impacted soil,” we arrived at our destination and got out of our vehicle.

A cylindrical steel structure, nine feet tall and over seven feet in diameter, serves as the “Project Faultless” memorial. The huge steel pipe descends 3,200 ft. into the earth, and on January 19, 1968, an underground thermonuclear explosion took place directly below where we stood. After lowering the bomb, the pipe was filled with concrete to create a “nuclear plug.” Before the detonation, the top of the pipe had been level with the ground—the surrounding area collapsed nine feet in elevation due to the force of the explosion. A brass plaque on one side commemorates the event, and on the opposite side, spray-painted graffiti echoes human shadows etched in stone near ground zero of the 1945 Hiroshima and Nagasaki bombings.

The blast at Project Faultless had a yield of approximately 1 megaton, about 67 times the energy of the bomb dropped on Hiroshima. The explosion created a huge cylindrical underground cavity referred to as a nuclear rubble chimney. At the bottom lies over 500,000 metric tons of highly radioactive material. The radiation levels are comparative to the core of a nuclear reactor. Petroleum was later injected into the ground in order to contain the radiation—thus the warning signs my daughter and I passed on our way to the site. I found it ironic that oil, once pumped from deep inside the earth, was used as an attempt to contain the radioactivity. The U.S. Department of Energy, and the Nevada Division of Environmental Protection, are presently studying whether radioactivity could escape via groundwater flow.

More than 900 bombs were tested at the Nevada Test Site farther to the south. Project Faultless was conducted outside the NTS because of safety risks to nearby Las Vegas. The Atomic Energy Commission (AEC—known today as the Department of Energy, or DOE) decided to conduct increasingly powerful tests in even more remote areas. The goal of the test was to see if the land was fit for testing a 5 megaton thermonuclear warhead for the Spartan missile. The test failed because of the extensive faulting around the test area. It was decided that the land was unfit for multi-megaton nuclear tests (Project Faultless actually created a lot of major faults), so a similar calibration test was conducted at Amchitka Island, Alaska, in the fall of 1969. It was one of many nuclear experiments in Alaska with a connection to Nevada, which I will address in later posts.

The sun hovered overhead, its energy produced by nuclear fusion of hydrogen and helium, much like the process of a thermonuclear weapon. I finished taking photos of the “nuke plug” as my daughter gazed toward the man-made valley, a result of Project Faultless. In the distance, cattle grazed across the landscape and a jackrabbit ran along a hillside of thick sagebrush. My father, an engineer in the Navy, once told me: It’s not always the things you can see that might possibly hurt you, but rather the things you can’t. Experiencing enough nuclear history for one day, we climbed back into the Jeep and headed down the road. 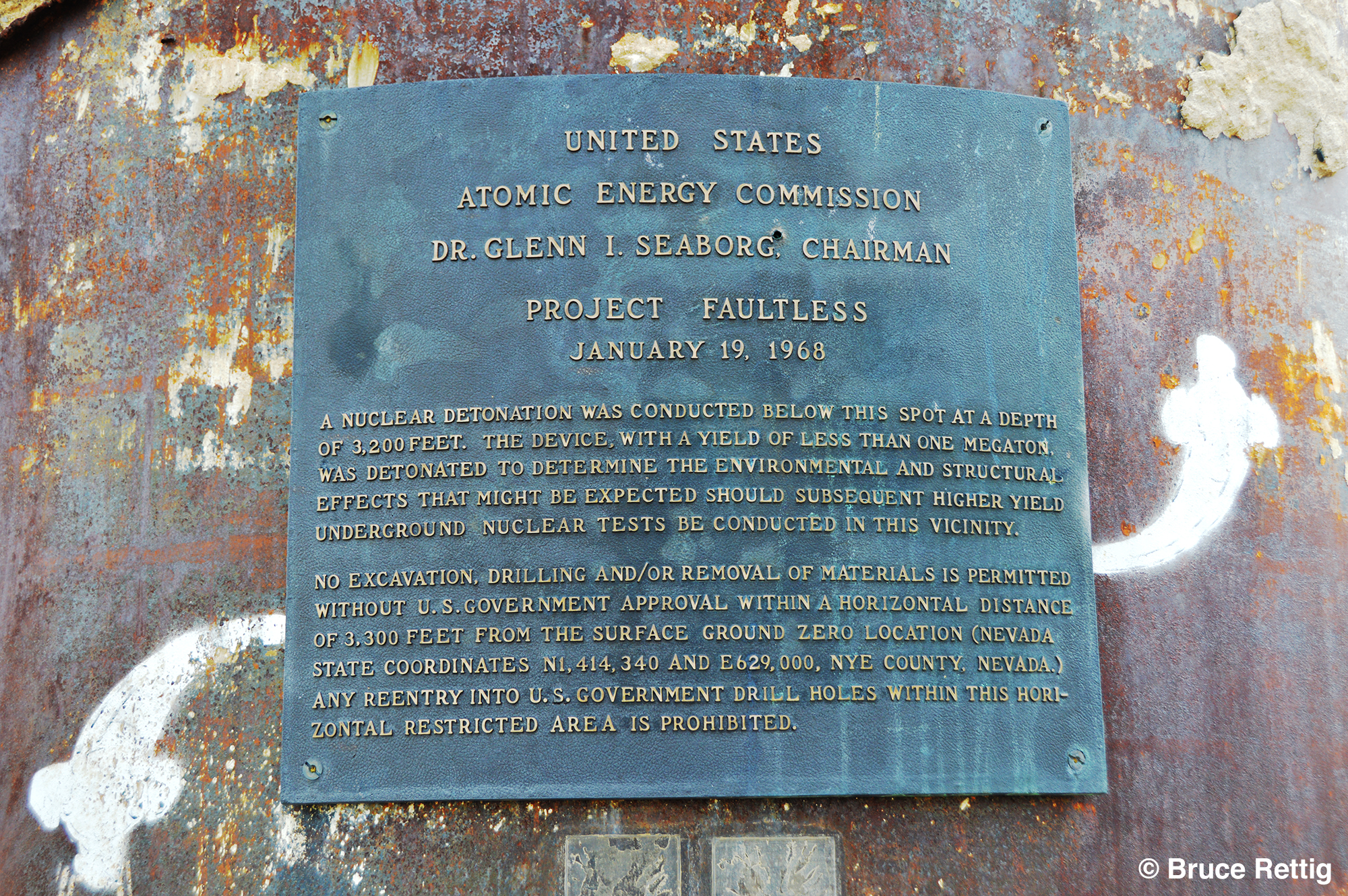 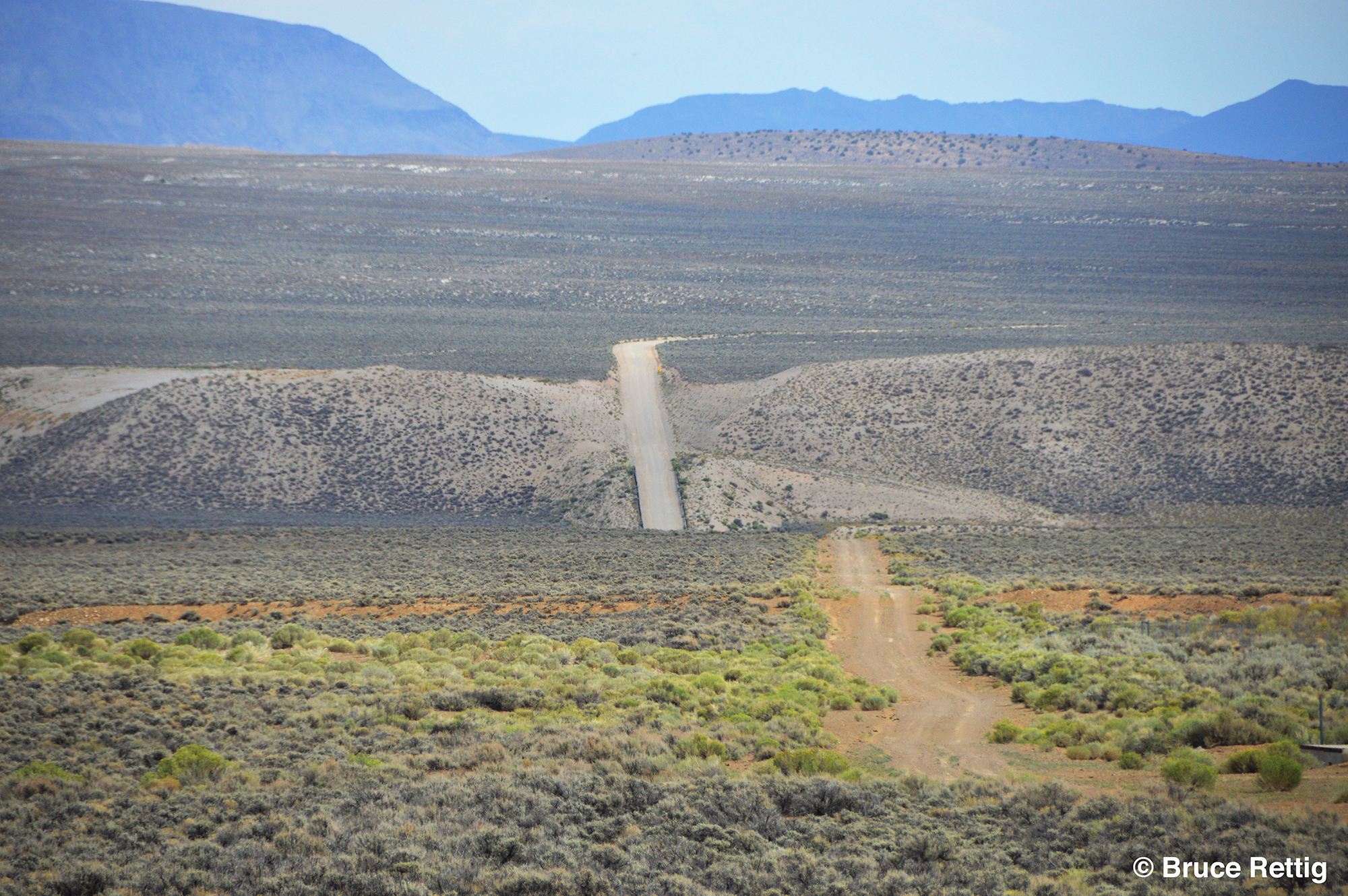 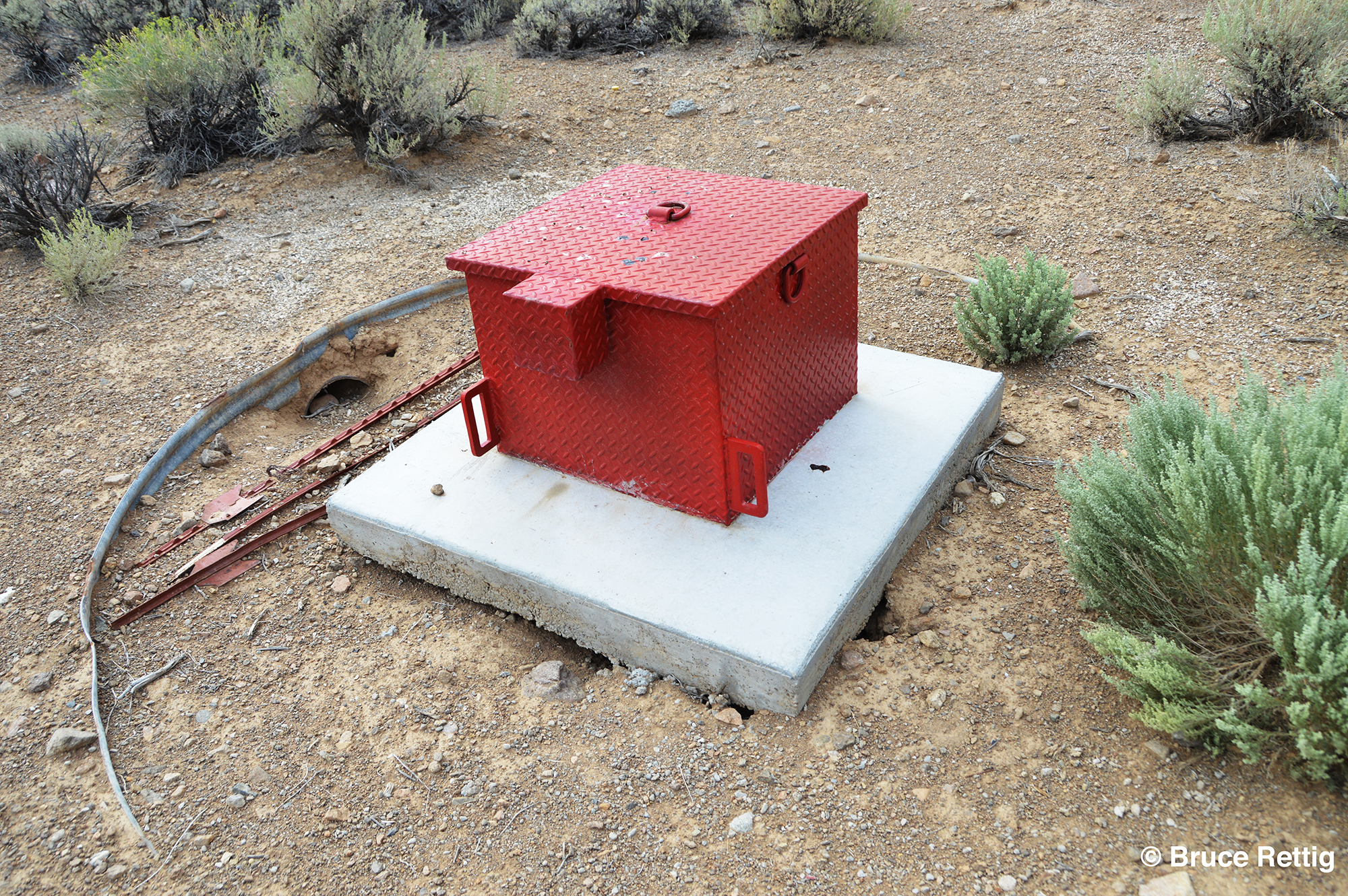 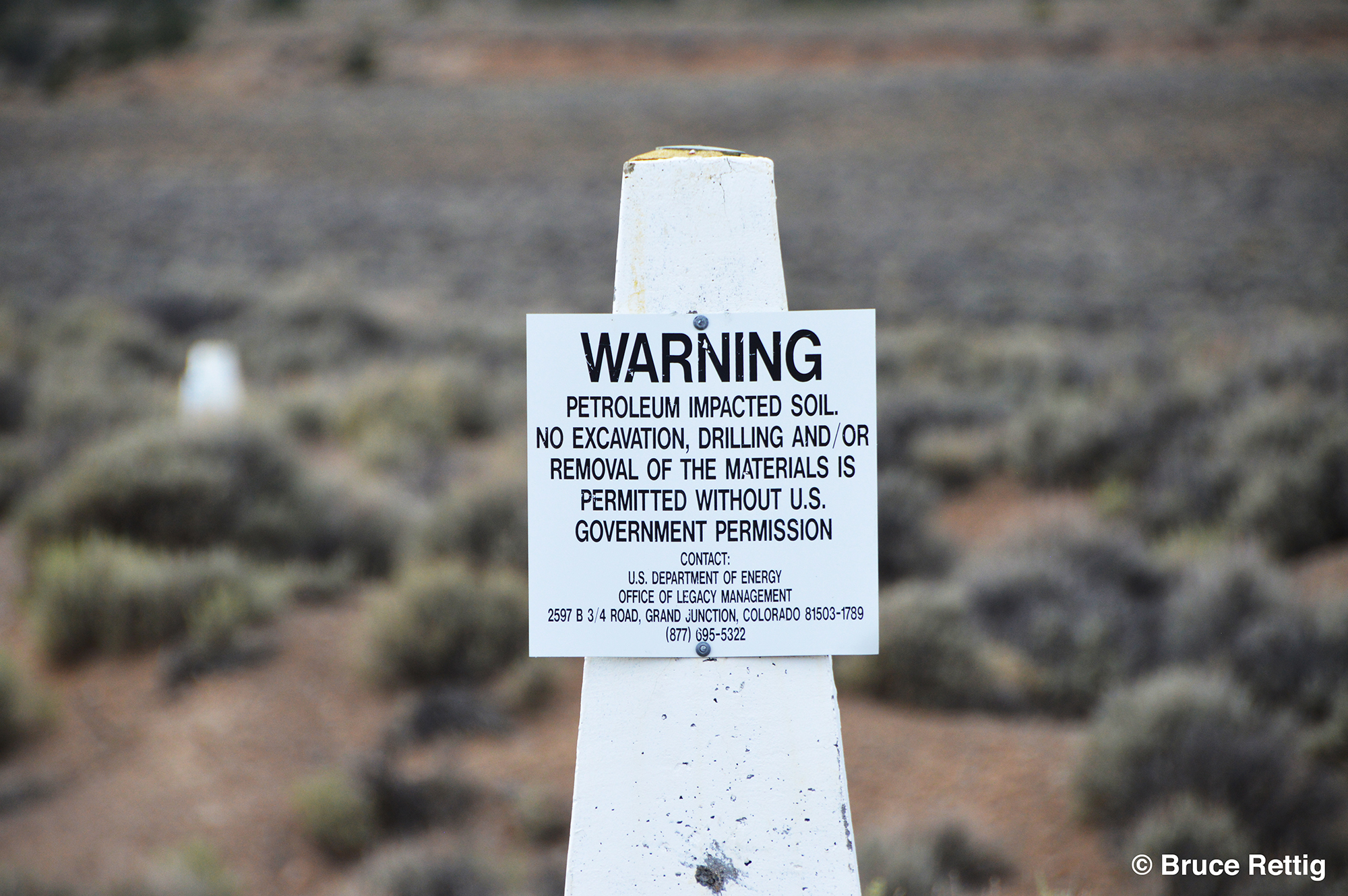 Warning sings along the way to Project Faultless.