Rockin’ in the Freeze World 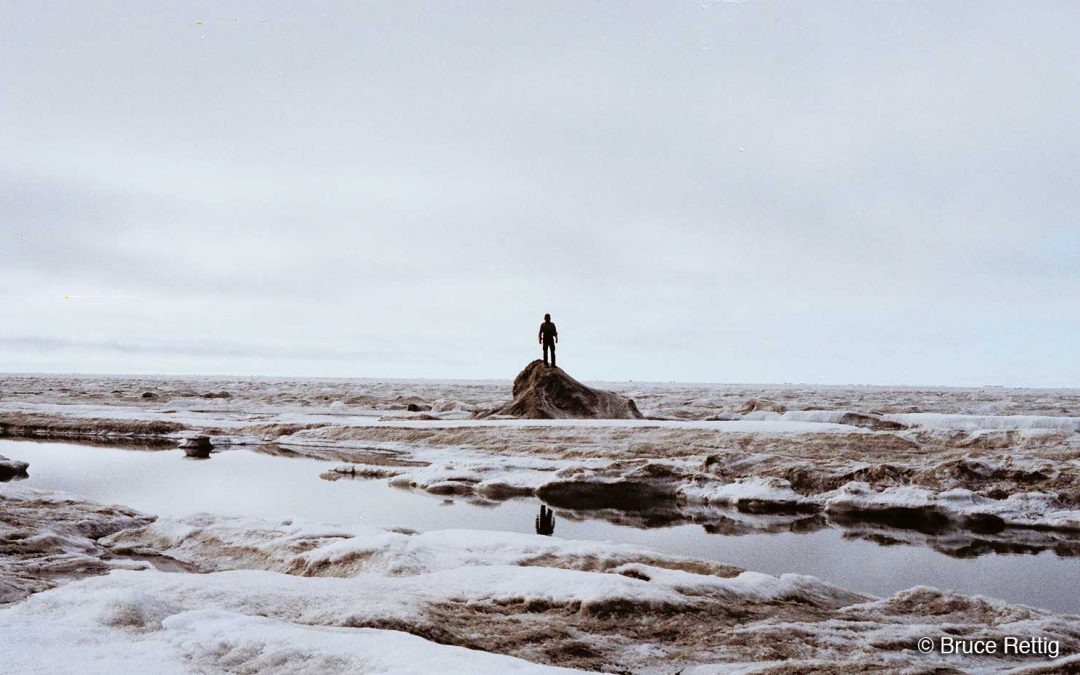 On a small arctic island, a rumble reverberated across the tundra as government-built houses rocked sideways. On Sunday morning, August 24, 2018, the Alaska Earthquake Center recorded a magnitude 6.4 earthquake fifty-two miles southwest of the village of Kaktovik. According to their report, “It was, by a wide margin, the largest earthquake ever recorded north of the Brooks Range in Alaska.” Kaktovik, a coastal Iñupiat village of about 260 residents, is located at the northern edge of the Arctic National Wildlife Refuge (ANWR), and about eleven miles from the Prudhoe Bay Oil Field and Trans-Alaska Oil Pipeline. Plans to allow oil extraction in ANWR are now underway due to an executive order to expand offshore drilling in the Arctic and open up protected federal land.

Kaktovik resides on an island that had once been a place of trade, and thus named “Barter Island.” This location also served as a Distant Early Warning Line (DEW Line) station in the 1950s, with a US Airforce runway and outpost. The arctic DEW Line system consisted of radar stations set up to detect incoming Soviet bombers during the Cold War and provide early warning of any sea-and-land invasion.

In the summer of 1982, I spent part of my summer living at Barter Island while working as a merchant marine in Prudhoe Bay (that’s me standing on arctic ice in the feature photo.) Our fleet of boats and barges had ripped free of their moorings during an arctic blast and drifted to the island’s shore. During my time there, I met many of the Iñupiat people, and learned about their culture and history. Kaktovik’s Inupiaq name, Qaaktugvik, means “place to net fish.” Caribou, sheep, muskoxen, bears, birds, seals, and whales were once hunted for subsistence. Remnants of old village sites and hunting camps can still be found on the island, along with both ancient whale bones and those taken in recent years. Whale meat, consisting of the skin with blubber, is called “maktak,” and is still an important food source.

Historically, earthquake activity in the Kaktovik area is significantly below the Alaska state average, however it is 70% greater than the overall U.S. average. Three months after the earthquake near Kaktovik, a 7.0 magnitude quake hit Anchorage, resulting in major damage to homes, roads, and overall infrastructure.

To accommodate the projected movement and intense shaking from a magnitude 8.0 earthquake, the zigzagging Trans-Alaska Oil Pipeline (across the Denali Fault) is supported on Teflon shoes that are free to slide along horizontal steel beams. Such engineering solutions used in the pipeline design, and the studies that led to the construction, cost only about $3 million when they were completed in the 1970’s. Had the pipeline ruptured in the 6.7 magnitude Denali Fault quake of 2002, the estimated lost revenue and cost of repair and environmental cleanup would have exceeded $100 million.

The Trans-Alaska Oil Pipeline transports approximately 500,000 barrel of crude per day from Alaska’s North Slope to Valdez. The Alaska Pipeline is now moving far less oil than the system was designed to handle, and engineers state that more volume is needed in order for the system to be cost-effective—another reason for oil extraction from ANWR (over two million barrels flowed down the pipeline per day in 1988). An increase in flow also means an increase in spillage if the system ever did experience a catastrophic failure. In 2002, the largest oil spill to occur on the tundra of Alaska’s North Slope deposited approximately 267,000 gallons of thick crude oil over two acres in the sprawling Prudhoe Bay production facilities, forcing cleanup crews to work in below-zero temperatures to vacuum and dig up the thick mixture of snow and oil. The spill went undetected for five days before an oilfield worker detected the smell of hydrocarbons when driving through the area.

Kaktovik and the Iñupiat will undoubtedly experience more earthquakes in the future. And if the expansion of oil development into the Arctic National Wildlife Refuge continues to move forward, the resulting environmental and social impact could rock their cultural foundation and impact their homelands forever. 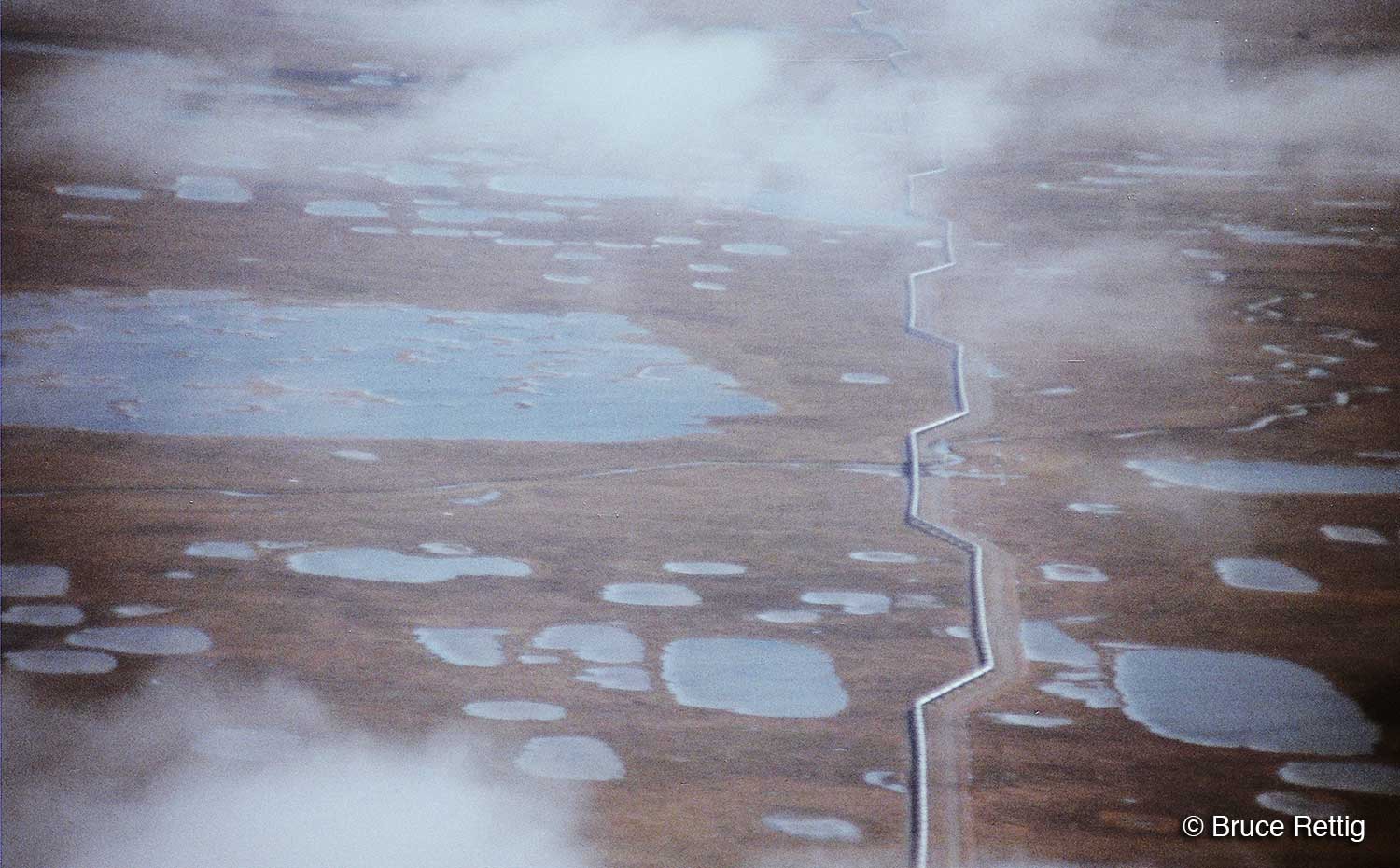 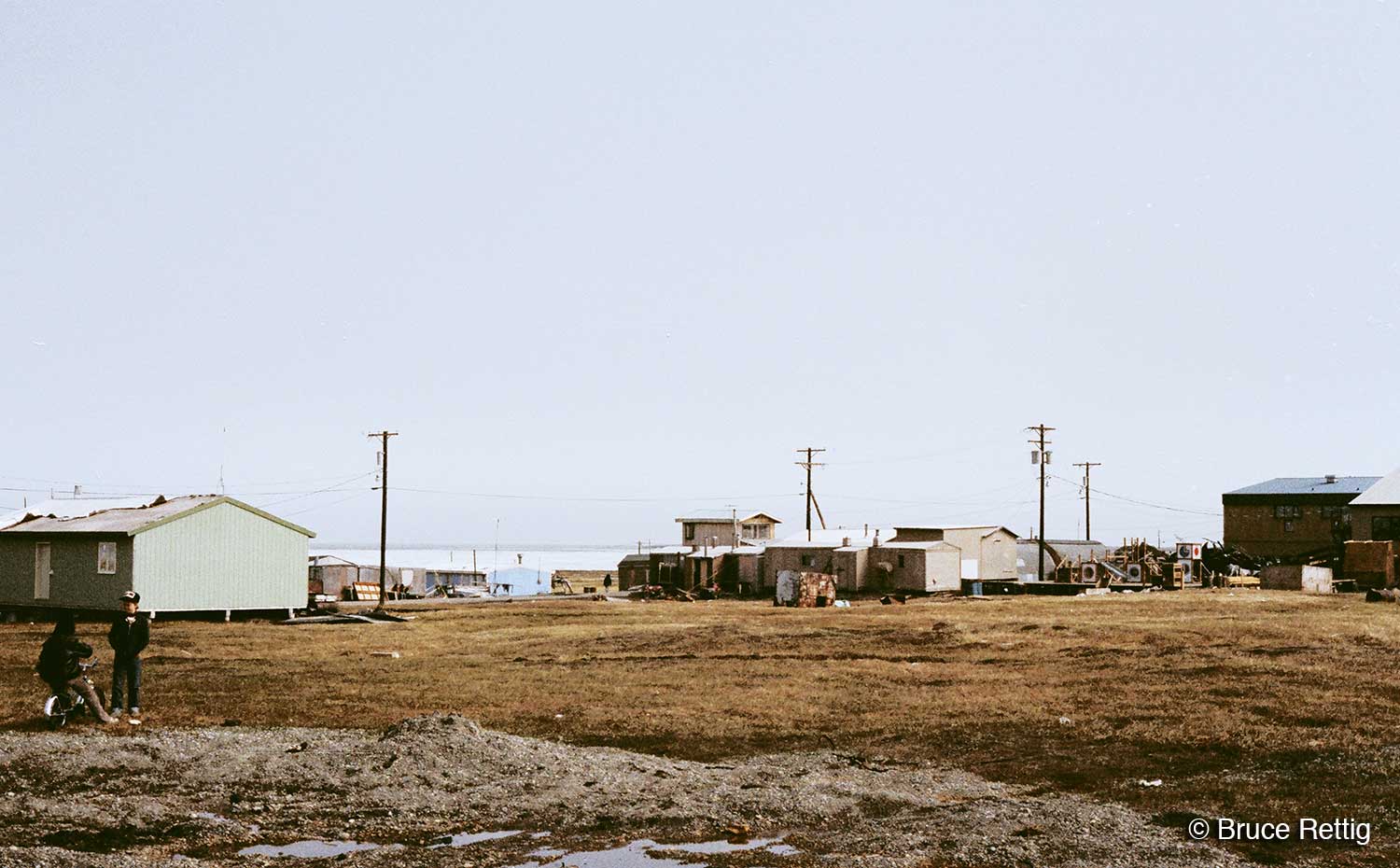 The village of Kaktovik, Alaska. 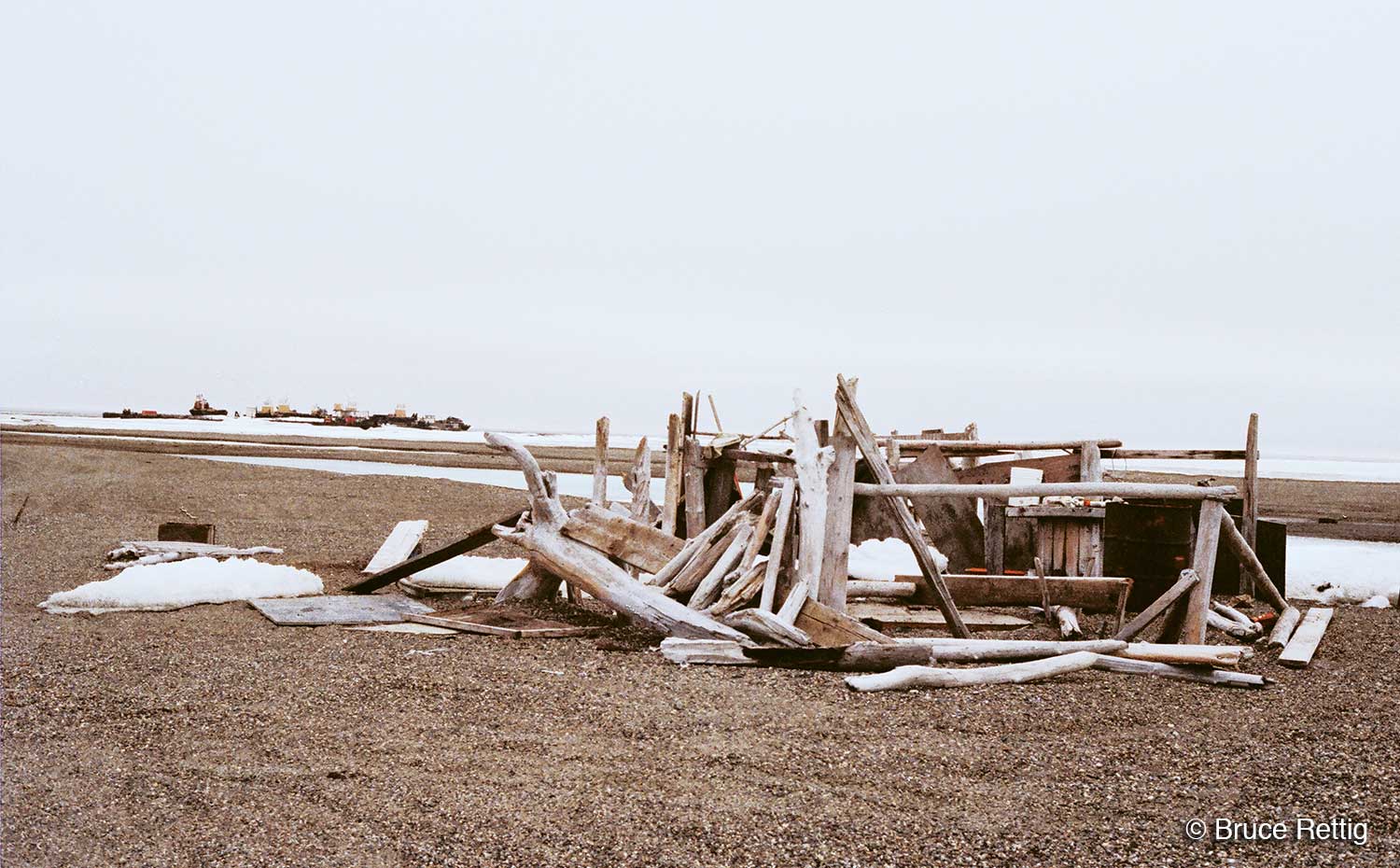 Remnants of a whaling camp near Kaktovik. Our fleet of boats and barges are in the background. 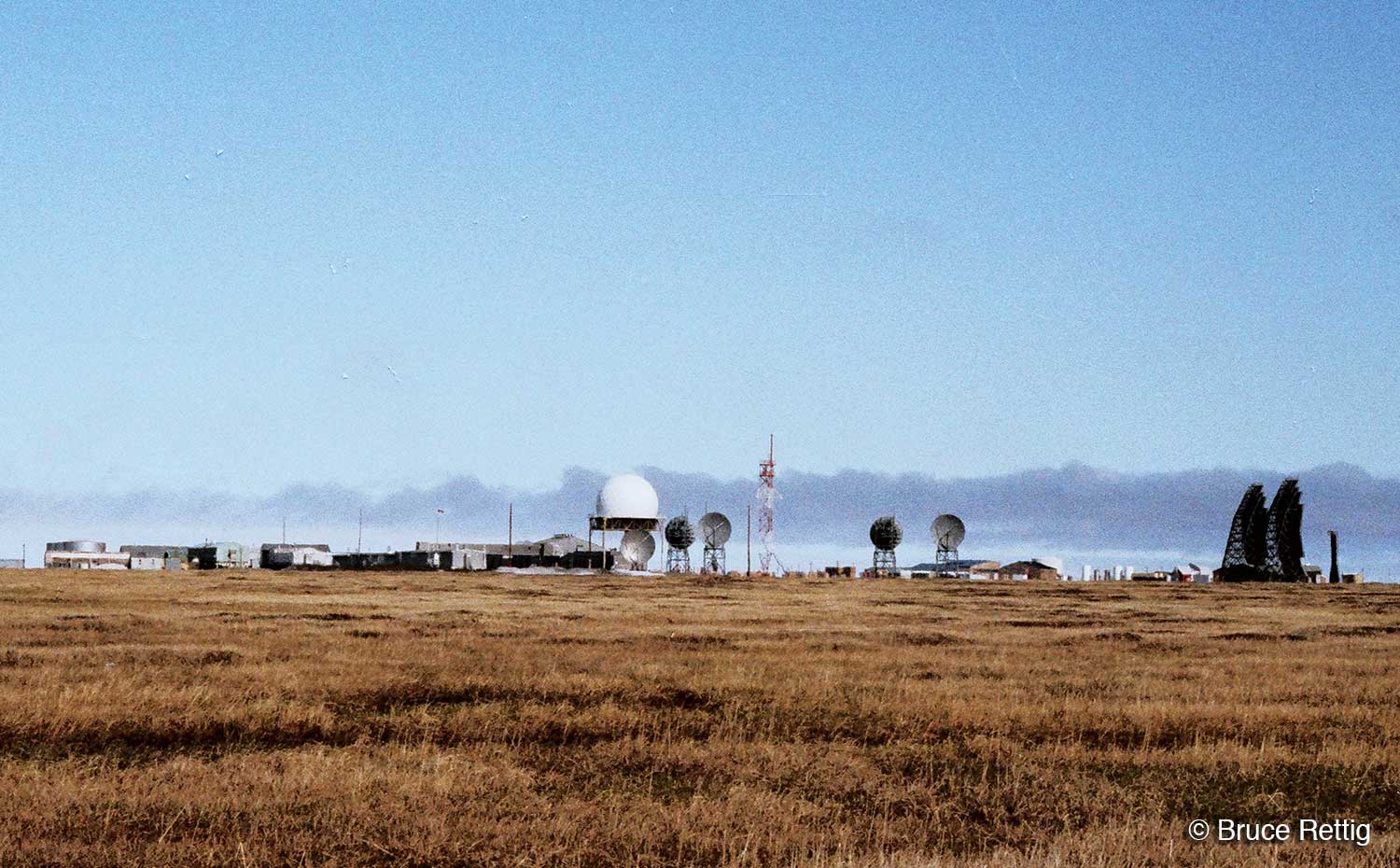