Zen and the Art of Snow Shoveling 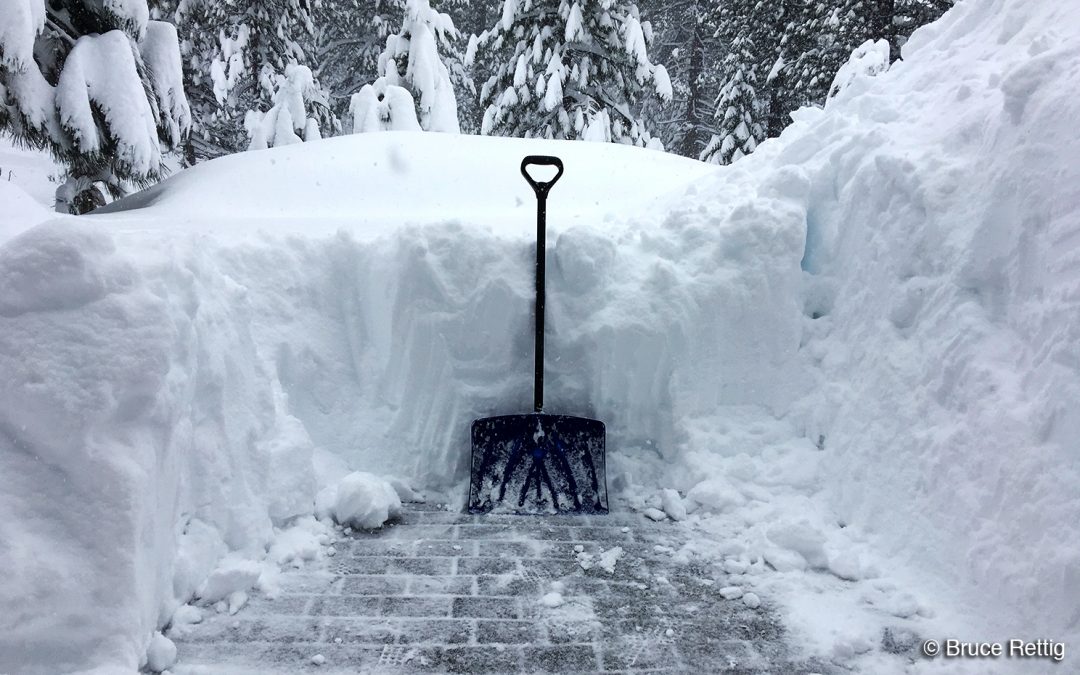 I first mastered the finer points of living in snow country after moving from the San Francisco Bay Area to a small community college in the Sierra foothills. Sharing a cabin near Sonora pass with a ski patrol and fellow classmate, “Snow Shoveling 101” was added to our curriculum. After these first two years of college, and a growing interest in ski bumming, it only made sense to continue higher educational pursuits (in academics and elevation) near the Rocky Mountains. The University of Colorado, in Boulder, was a natural choice—a mecca for light, powdery snow often measured in feet, not inches.

Did Colorado winters provide adequate snow shoveling for this California kid? Nope. For four summers, I trekked to Prudhoe Bay, Alaska, over 250 miles north of the arctic circle to work as a grunt laborer, longshoreman, and merchant marine. Friends and family sent letters filled with stories of hot summer days, afternoon barbecues, and evening baseball games, while my stack of time cards documented months of twelve-hour days shoveling through snowdrifts to uncover a fleet of tugboats, barges, and heavy equipment. A good percentage of the crew’s sanity slipped away one shovelful of snow at a time. For others, this monotonous labor evolved into a mindscape. I had experienced the Zen of snow shoveling for the first time.

I now live at Lake Tahoe, near the top of the Sierra Mountain Range. A local friend once quipped, “. . . I’m going to die with a snow shovel in my hand.” Yes, it can definitely be a bit demoralizing when you’ve meticulously and artfully cleared the driveway, knocked icicles off the roof, shoveled areas in front of windows, and unburied the gas meter (all for the umpteenth time)— then another foot of fresh snow descends from the heavens. Or the snowplow pushes a wall of cinder-block-sized chunks of ice and frozen muck in front of your freshly-cleared driveway. These are some of the nuances (to put it politely) of dealing with heavy snowfalls.

Although this sounds like a frozen hell to most sane people, I find the constant ebb and flow of snow buildup and removal also offers a time to clear one’s head. Maybe not as quiet and soothing as meditation, especially when enduring the clattering racket of a ready-to-breakdown-at-any-minute snow blower—it can, nonetheless, be a time for contemplation and deeper thinking. Granted, nonsensical rants stuffed with colorful expletives when snow slides off your roof and blocks the backdoor as tight as a bank vault, isn’t a form of chanting by any means. It does, however, provide an opportunity to vent and release deeper inner frustrations.

Then there’s the old adage, “You don’t know what you have until it’s gone.” Recent draught years in Northern California have resulted in water rationing, water wars, and catastrophic wildfires. Global warming hit home in a big way. During these environmentally challenging times, a high mountain blizzard is welcomed like a long-lost friend, arms wide open. Yes, shoveling snow often leads to greater insight, if not a greater appreciation for something essential for all life—water. At some point that six-foot mound of frozen stuff dumped on your front lawn will melt, feed a nearby stream, replenish groundwater, or evaporate into the atmosphere to form more rain or snow. The cycle continues.

With arms feeling like they’re about to explode, I’ll take all the snow, one shovelful at a time. 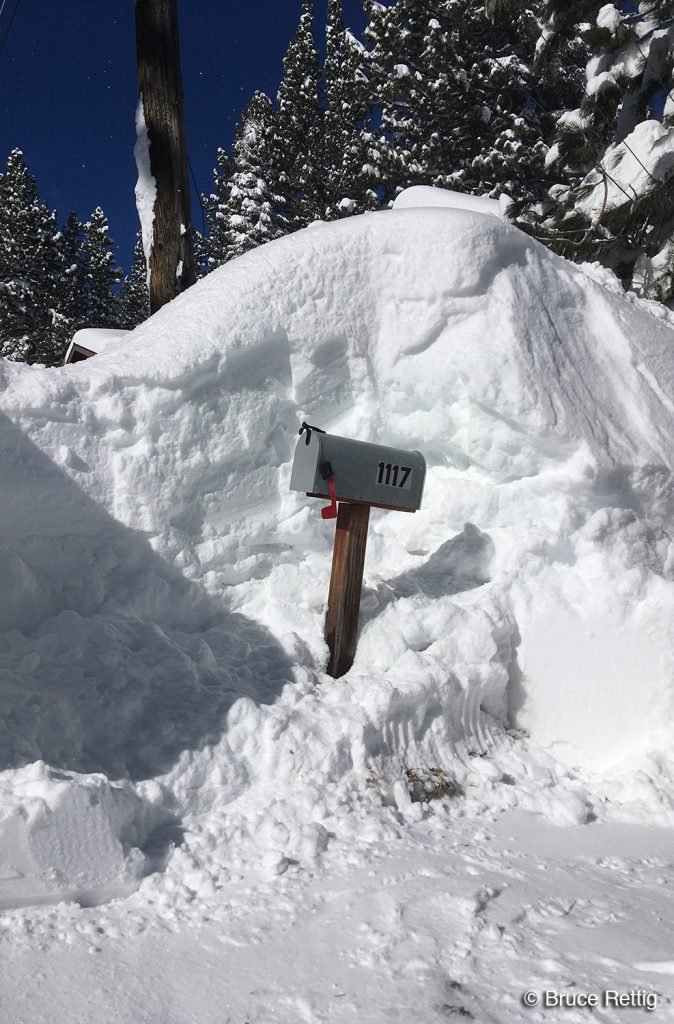 “Neither snow nor rain nor heat nor gloom of night stays these couriers from the swift completion of their appointed rounds” (the guy with the snow shovel also helps out!) 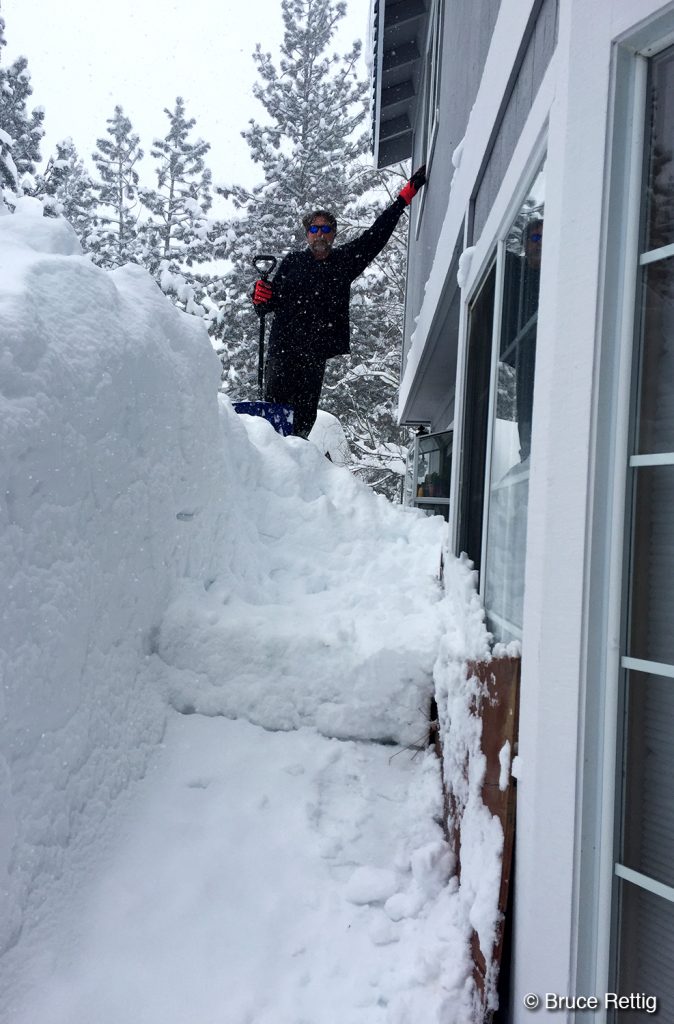 It’s getting deep when you can reach the upstairs window.