A Blast from the Past: Atomic Tourism in Las Vegas 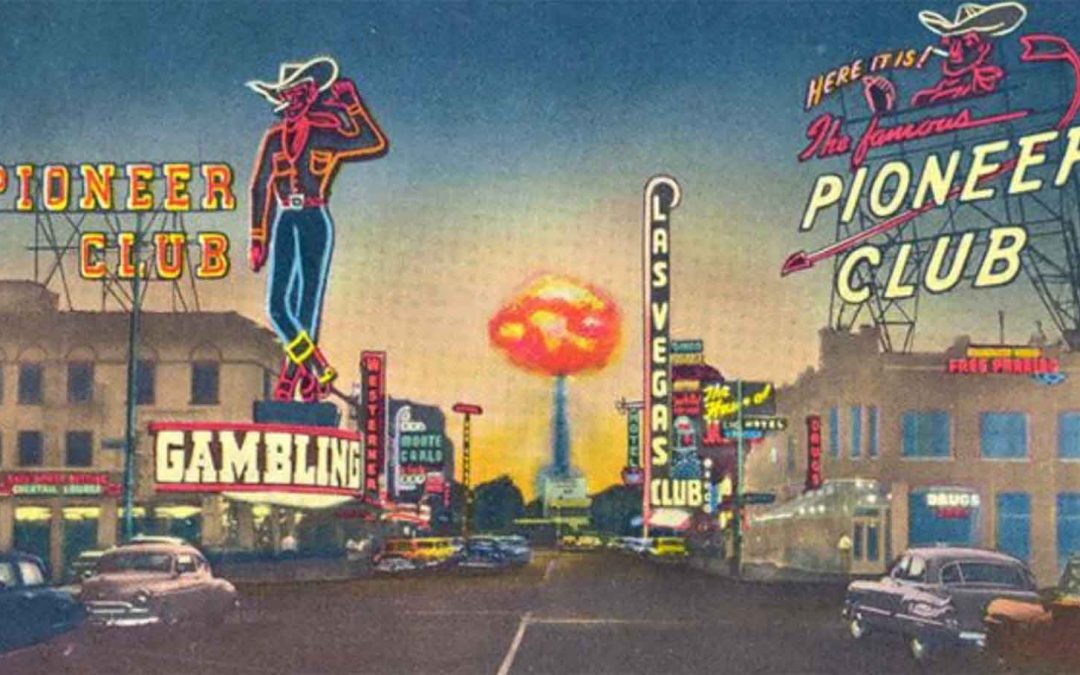 IT’S EASY TO GET LOST in the wasteland of research. Having worked in tourism marketing for over thirty years, and presently tackling a new writing project with an opening scene set in 1950’s Las Vegas, I tried my best not to get sucked into the fallout of atomic test stories and a bizarre chapter of Nevada history. I mostly failed and found myself spinning deeper into this weird black hole.

I wrote a post a year ago titled, “How I Never Learned to Stop Worrying and Love the Bomb.” It focused on a generation that grew up in the age of nuclear proliferation and the resulting angst and fear of an atomic disaster. Between 1951 and 1992, the U.S. government conducted a total of 1,021 nuclear tests at the Nevada Proving Ground (now named the Nevada Test Site, or NST) sixty-five miles north of Las Vegas. The site earned the nickname, “The most bombed place on Earth.” 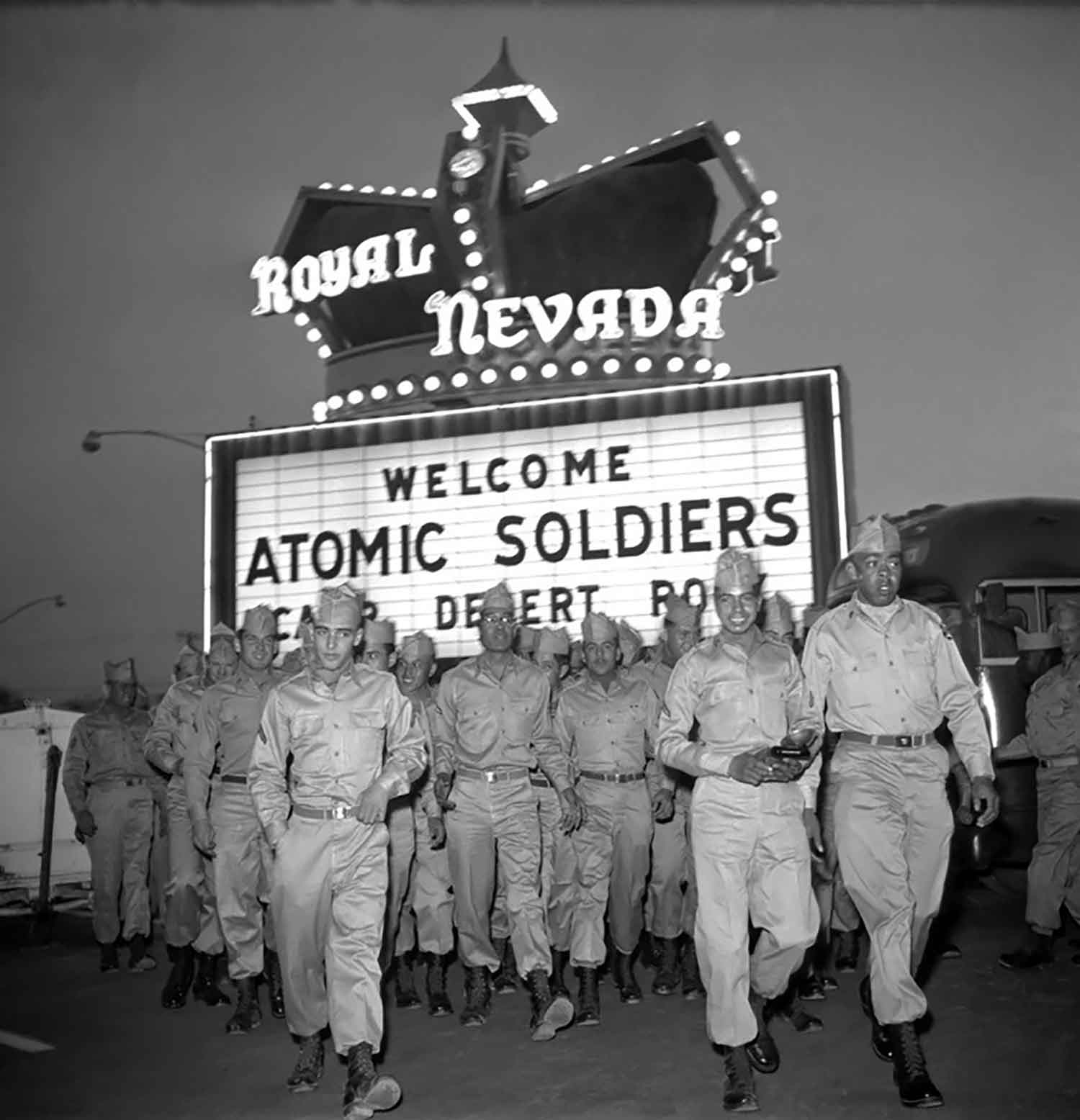 Another “boom” occurred in Las Vegas when these tests took place. Between 1950 and 1960 the population grew by 161%, partly due to the burgeoning casino industry, but another reason was the chance to see live nuclear tests in person. During these years, Las Vegas capitalized on “atomic tourism,” and hotel guests witnessed nuclear testing directly from their hotel windows. Advertising for these early morning events included taglines like, “Up and Atom!”

The Las Vegas Chamber of Commerce promoted the blasts as a unique Vegas attraction, and printed calendars advertising detonation times and the best locations to watch the explosions. Hotels held roof parties, perfect locations to see the mushroom cloud. The Sky Room at the Desert Inn featured fantastic panoramic views, as did any north-facing penthouse suite. “The best thing to happen to Vegas was the Atomic Bomb,” proclaimed Horseshoe Club casino owner Benny Binion, 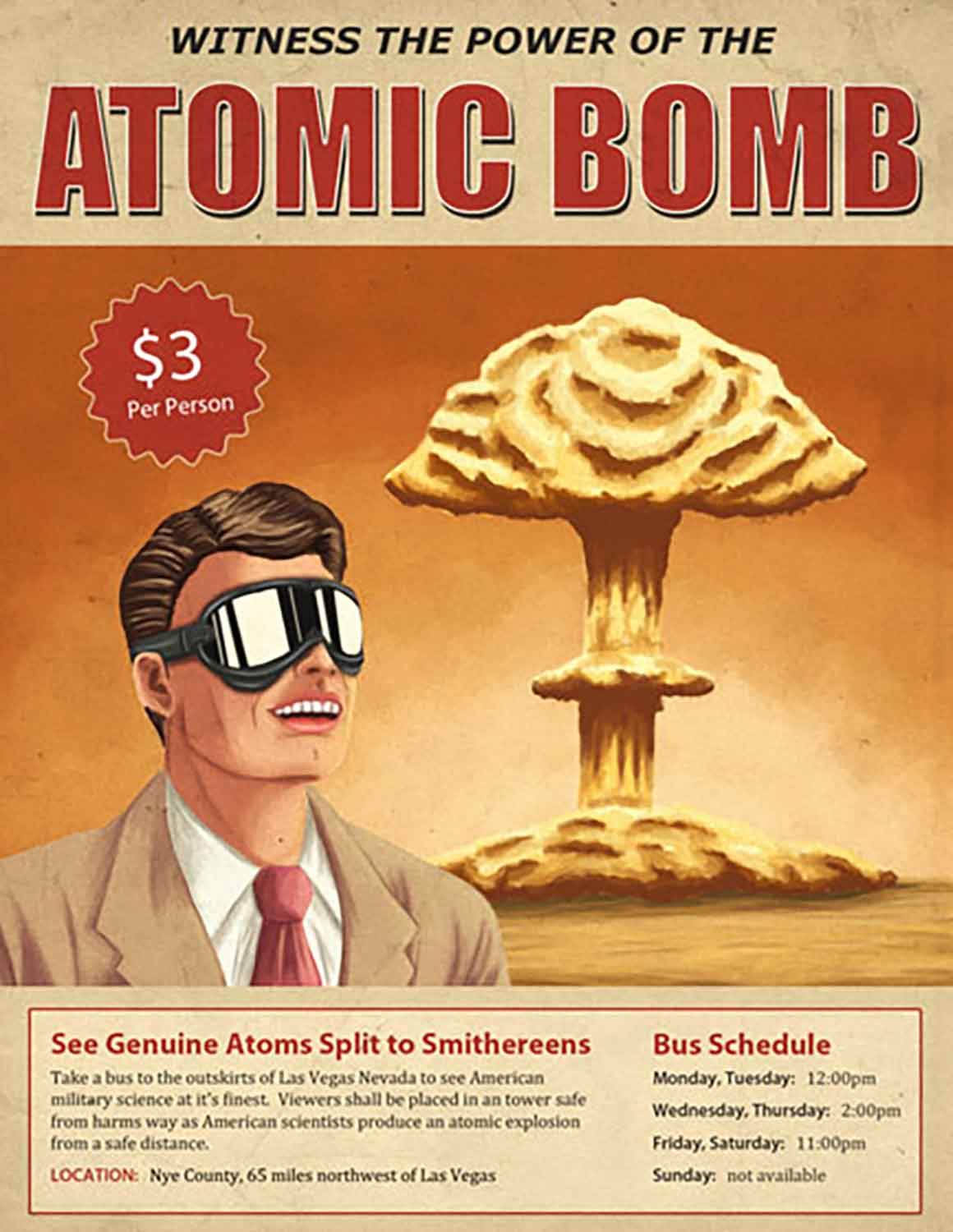 A mere $3 for a safe viewing distance, Deal me in!

The city of Las Vegas transformed itself into “Atomic City, USA,” with atomic cocktails, atomic hairdos, and atomic festivities. Many casinos hosted “dawn bomb parties,” extravaganzas that drew visitors to witness one of the greatest shows on earth—a nuclear explosion. Specialty drinks included the “Atomic Cocktail,” a near-toxic concoction of vodka, brandy, cognac, sherry, and champagne over ice, shaken well, then poured into an oversized champagne glass and topped off with an orange wedge on the rim.

This marketing frenzy also ushered in “Miss Atomic Bomb,” the apocalyptic pin-up girl of the 1950s. Arms spread above her head in a “V,” and a cotton mushroom cloud affixed to her white bikini, the image has become an iconic symbol of carefree Vegas kitsch set against a background of unfathomable power and destruction. There’s little known about Miss Atomic Bomb herself besides her stage name, Lee A. Merlin. Recently, this image adorned the 2012 album cover for the rock band, The Killers, and their hit single, “Miss Atomic Blonde.” 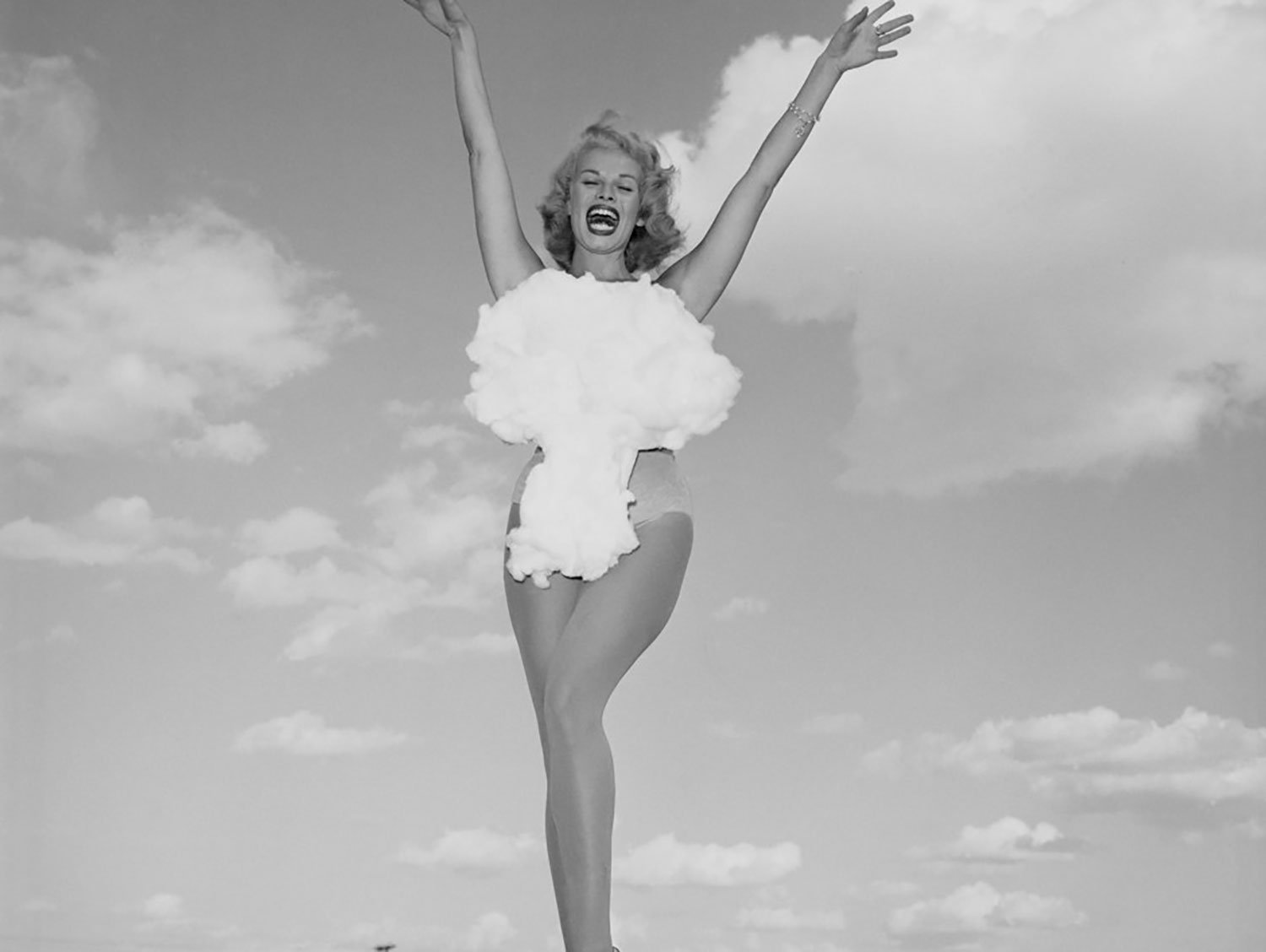 In April 1956, a young rock n’ roller, billed as “America’s only atomic-powered” singer, played nightly at The New Frontier Hotel. His real name—Elvis Presley. Since Nevada had gained fame as the home of atomic testing, Colonel Parker thought the name was catchy and booked Presley for a two-week engagement at The New Frontier. 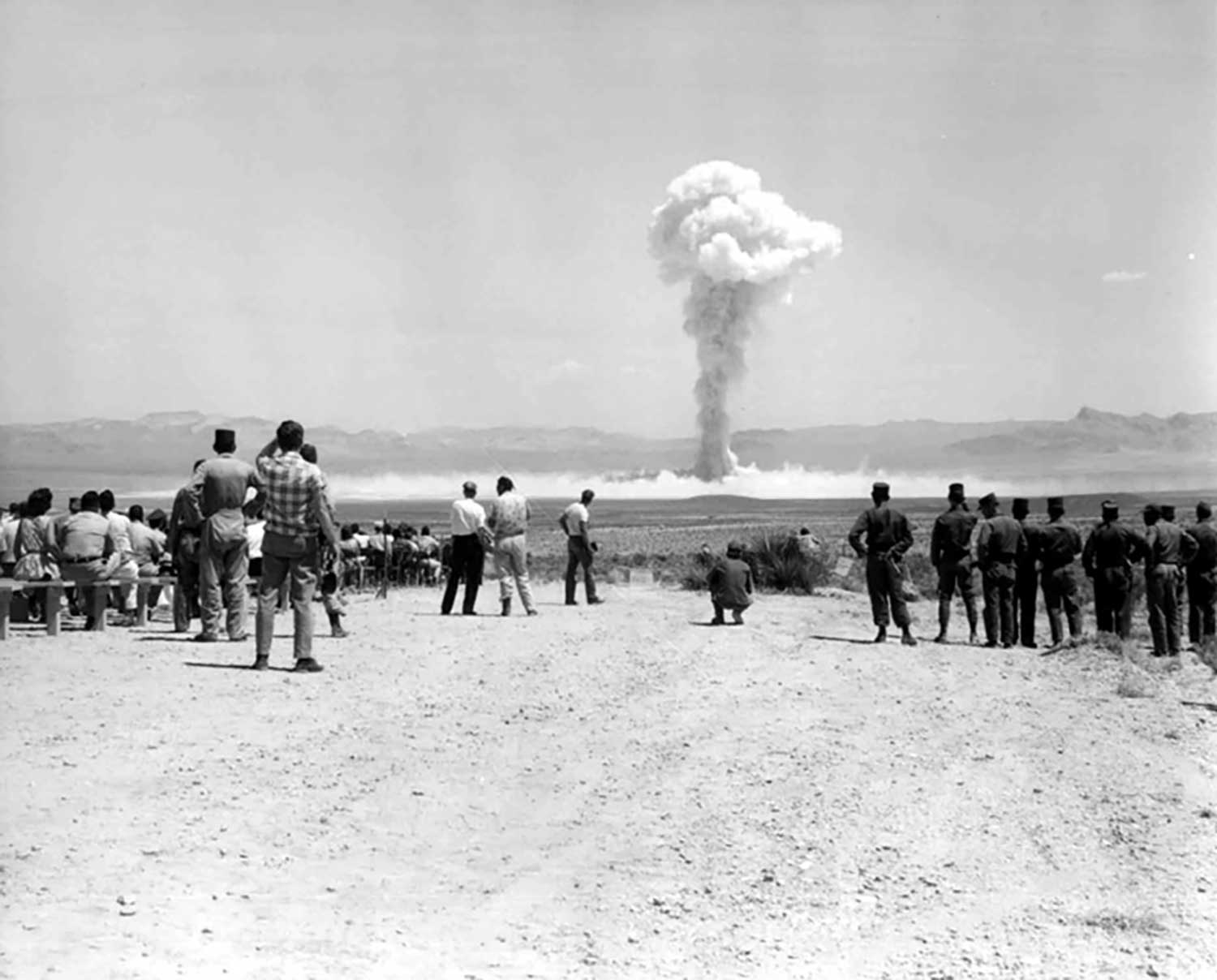 Atomic tourists taking in the sites.

Atmospheric nuclear testing ended in 1963 after the Limited Test Ban Treaty. The Department of Energy (DOE) continued to detonate underground nuclear devices at NST until 1992, when the Comprehensive Nuclear Test-Ban Treaty finally put an end to testing. Six decades after the very first test, negative results from the fallout are still being calculated.

Since I went down the rabbit hole of researching this topic more times than I would like to admit, future posts are sure to come. This period in atomic history seems so ludicrous and shocking, that it could be interpreted as a black comedy, but the consequences of these tests were devastating and widespread. In spite of wild Las Vegas parties and increased tourism, impacts from nuclear testing, and how it has affected the land, plants, animals, and human lives, is incalculable. And the longevity of these impacts are measured In half-lives. 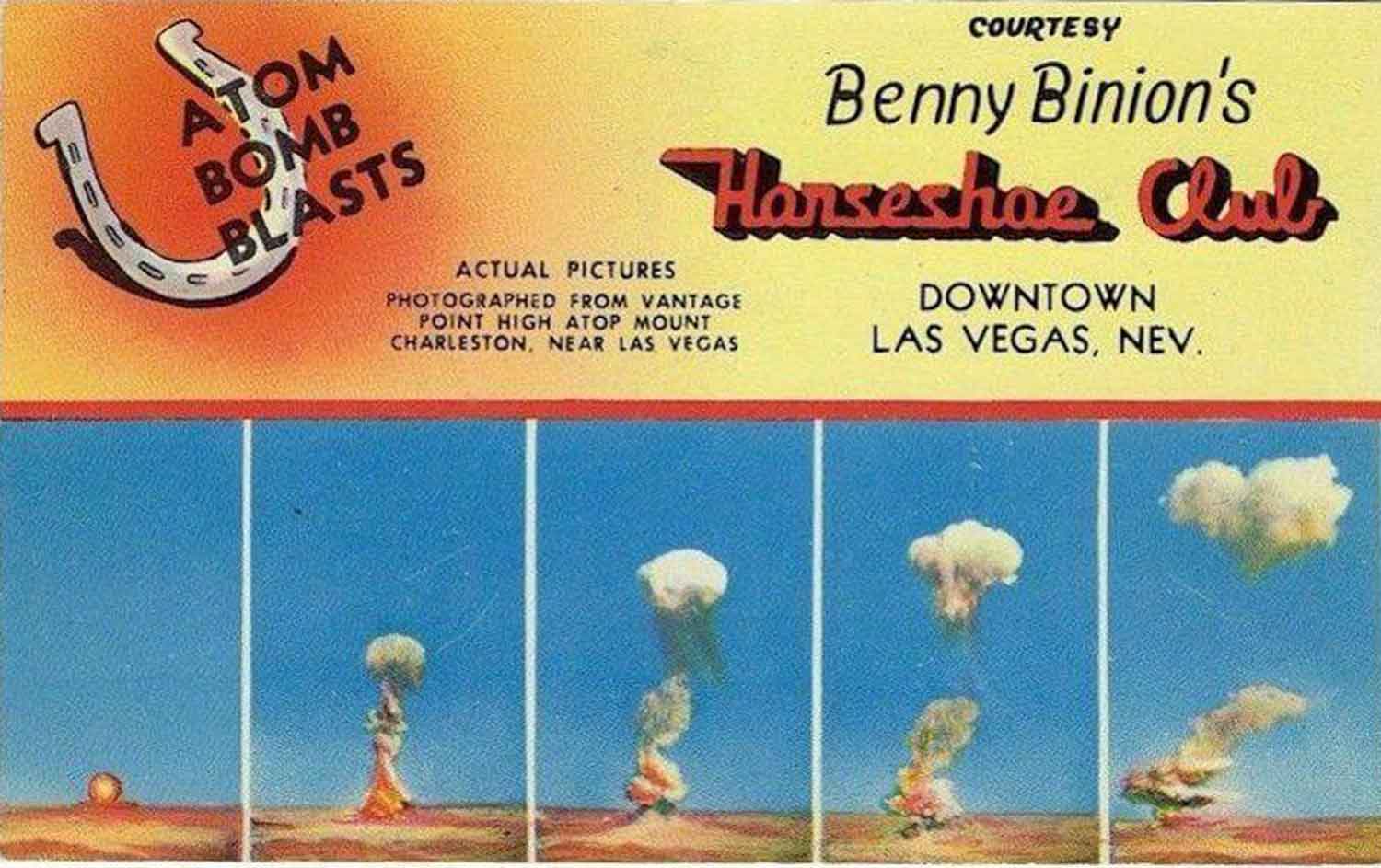 You don’t see this too often; a lucky horseshoe with the words “Atomic Bomb Blasts.” 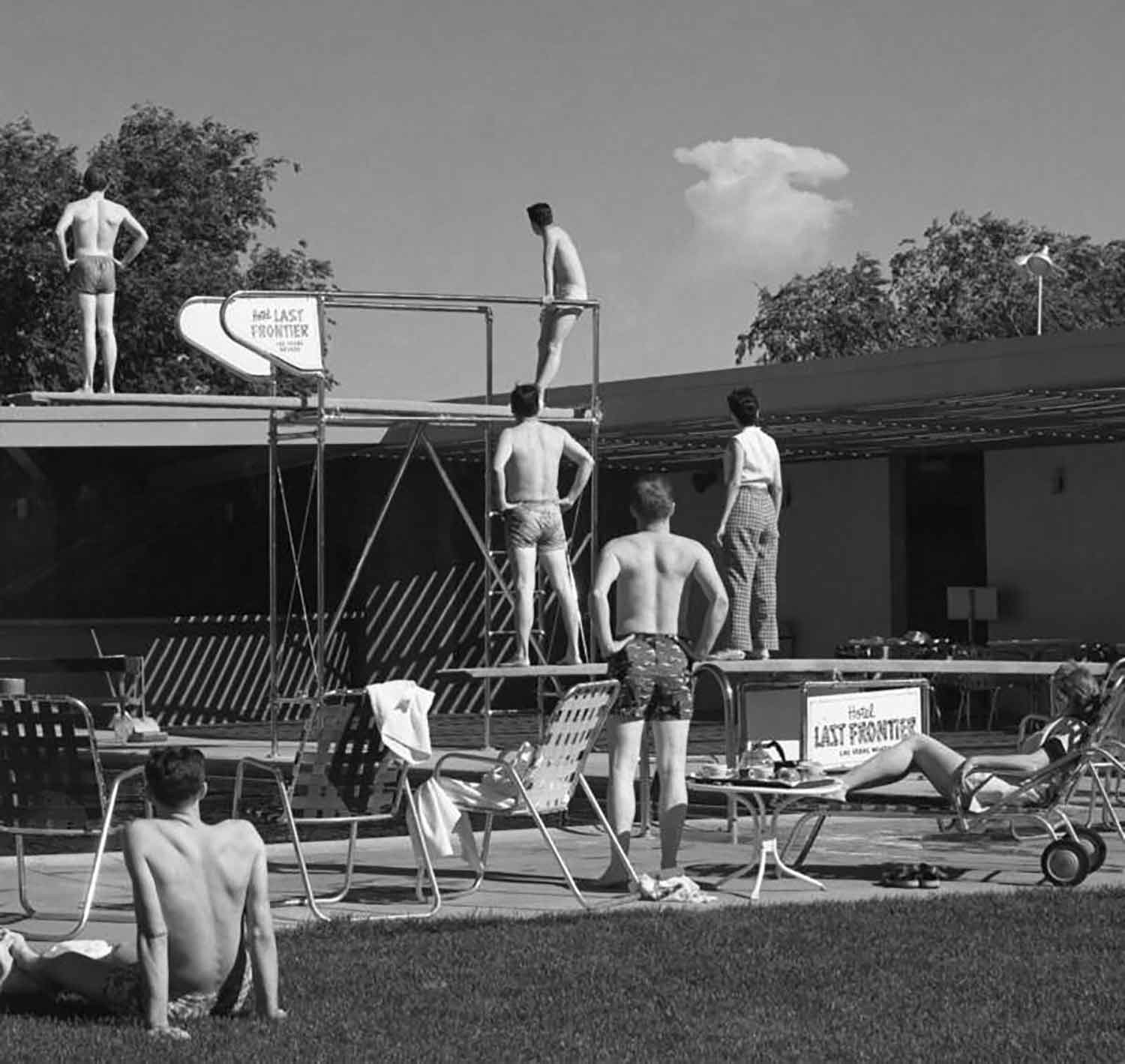 Good time for a dip in the pool.

How 1950s Las Vegas Sold Atomic Bomb Tests as Tourism
Between 1950 and 1960, the population of Las Vegas grew by 161%–partly due to the burgeoning casino industry. But another reason was a chance to glimpse actual nuclear tests in person.

Atomic Tourism: Vegas Visitors Watch Nukes Explode
Las Vegas is known as the city of lights and, at one time, that light was the glow of a nuclear detonation in the Nevada desert.