Out of Sight, Out of Mind? 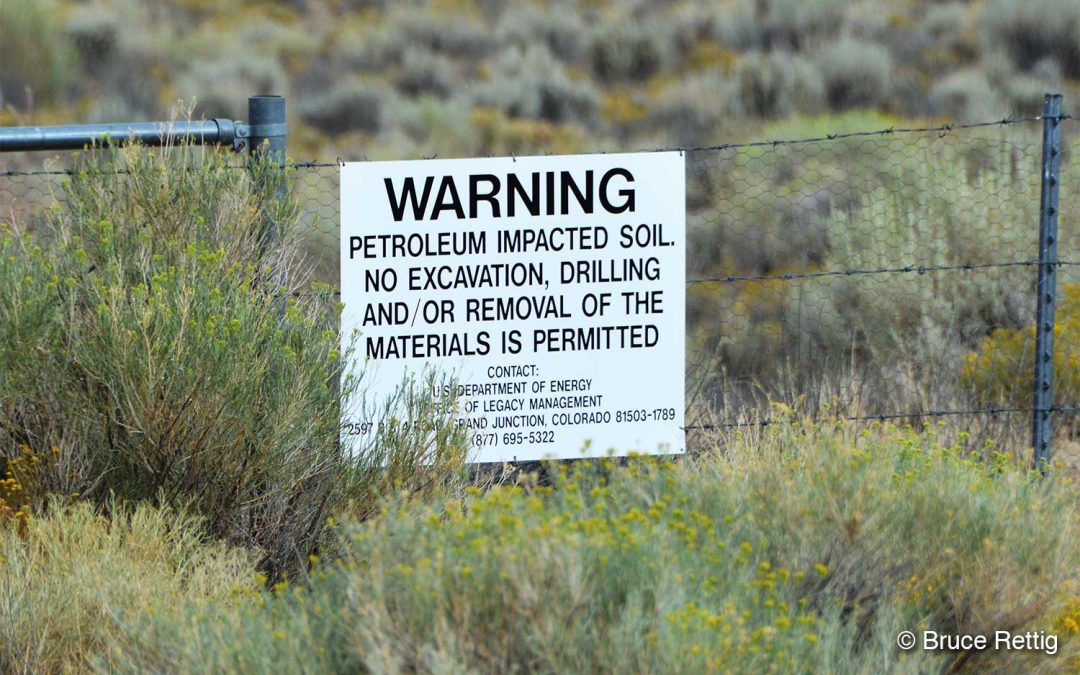 Earlier this year, the United States Department of Energy (DOE) revealed that it had secretly shipped one-half metric tons of weapons-grade plutonium from South Carolina to a nuclear security site in Nevada. Despite the state’s protests and an injunction, the government trucked the radioactive material to a location seventy miles north of Las Vegas. Future shipments would most likely pass directly through Las Vegas on the way to the Nevada National Security Site. An accident could permanently harm an area that is home to 2.2 million residents and hosts more than 40 million tourists a year. A city famous for its vibrant neon signs and casinos might radiate a new kind of glow.

Nevada is presently seeking a court order to block more shipments of plutonium as it pursues “any and all legal remedies,” including contempt of court orders against the federal government. Much of the animosity toward the federal government is linked to the handling of Yucca Mountain, a potential storage site for nuclear waste that many Nevadans oppose. The presiding U.S. president and his administration have vowed to re-open the site as a final destination for nuclear wastes. I attended a meeting in eastern Nevada where an assemblyman from southern Nevada was asked about the possibility of the Yucca Mountain site opening for storage. As a native Nevadan, the political representative believed that the government needs to clean up the mess that it left behind in the past, before creating a new one.

Huge amounts of nuclear materials have been secretly moved, buried, stored, and hidden in the high mountain desert over the years. Of course, the largest amounts of contaminants are a result of nuclear testing that took place in the 50s up to the 90s. During above-ground tests, westerly winds routinely carried fallout across St. George and southern Utah. Dramatic increases in cancers, such as leukemia, lymphoma, thyroid cancer, breast cancer, melanoma, bone cancer, brain tumors, and gastrointestinal tract cancers, were reported from the mid-1950s through 1980.

In later years, the federal government detonated 921 nuclear warheads underground at the Nevada Test Site. Each explosion deposited a toxic load of radioactivity into the ground, and in some cases, directly into aquifers. When testing ended in 1992, the DOE estimated that more than 300 million curies of radiation had been left behind, making the site one of the most radioactively contaminated places in the nation. In a study for Nye County, it’s estimated that the underground nuclear tests polluted 1.6 trillion gallons of water. That’s enough water to fill a lake 300 miles long, one mile wide, and twenty five feet deep.

A couple of years ago, I took a tour of the Nevada National Security Site with my son. We weren’t allowed to take any photos, but we saw where both above, and below-ground testing took place. The final stop was at a radioactive waste management site where low-level wastes are buried such as rags, papers, filters, equipment, discarded protective clothing and construction debris. In 2015, an explosion and fire took place at a similar low-level radioactive waste facility near Beatty, Nevada (click here to watch video of the explosion.) A year later, my daughter and I visited the site of “Project Faultless” where below ground testing took place outside the parameters of the Nevada Test site (click here to read a previous blog entry about Project Faultless). Signs across the landscape stated that the soil was “petroleum impacted.” I read later that oil was often used to insulate radioactive contaminated soil.

The idea that something is easily forgotten or dismissed as unimportant if it is not in our direct view, seems to be rapidly growing the past couple of years. This is true with both contaminated waste and inaccurate and misleading rhetoric. The reality is that no matter how deep you bury something—whether its radioactive bi-products, or the truth—it’s still out there. 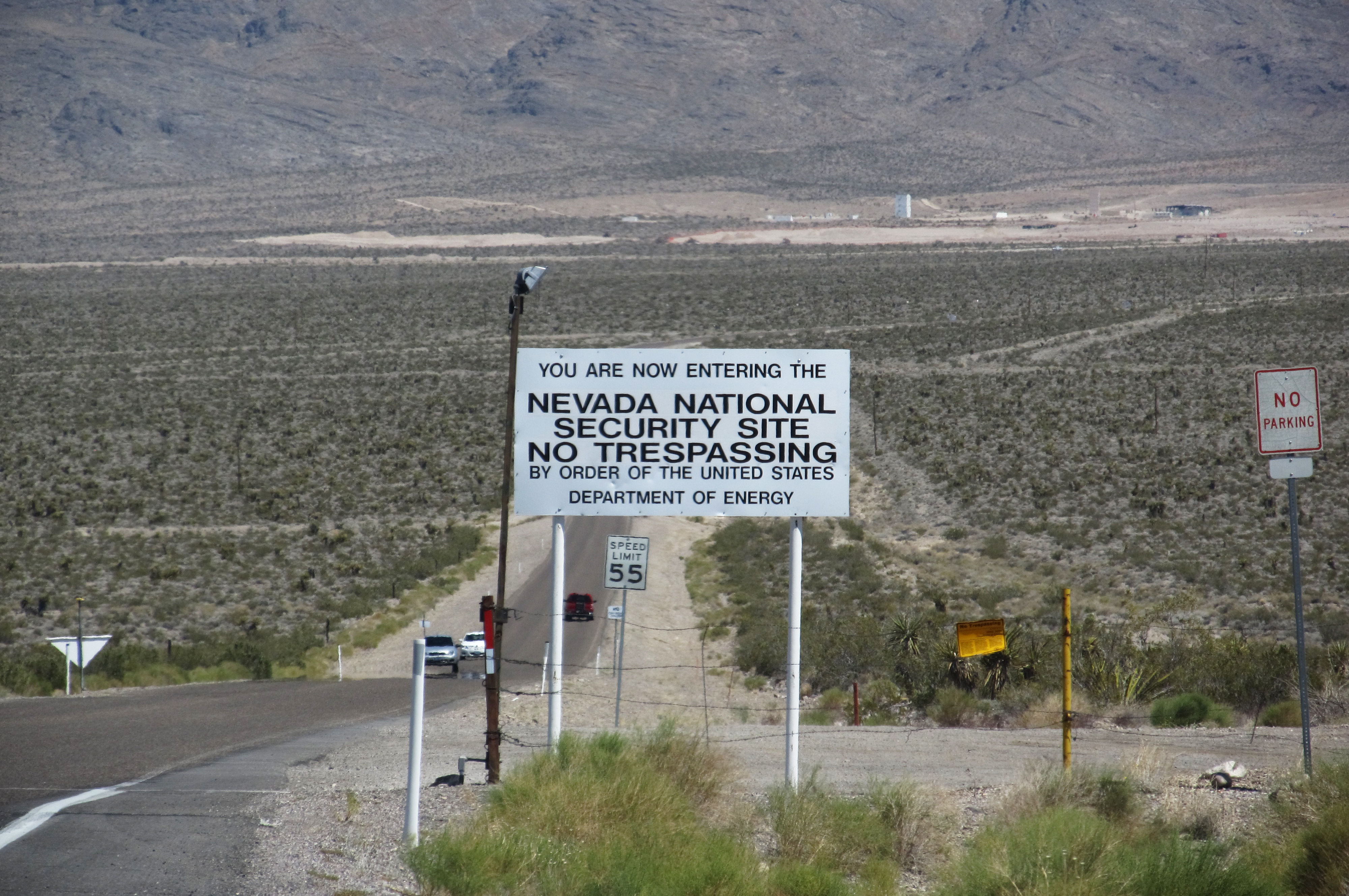 One-half metric tons of weapons-grade plutonium was moved to the NNSS earlier this year. 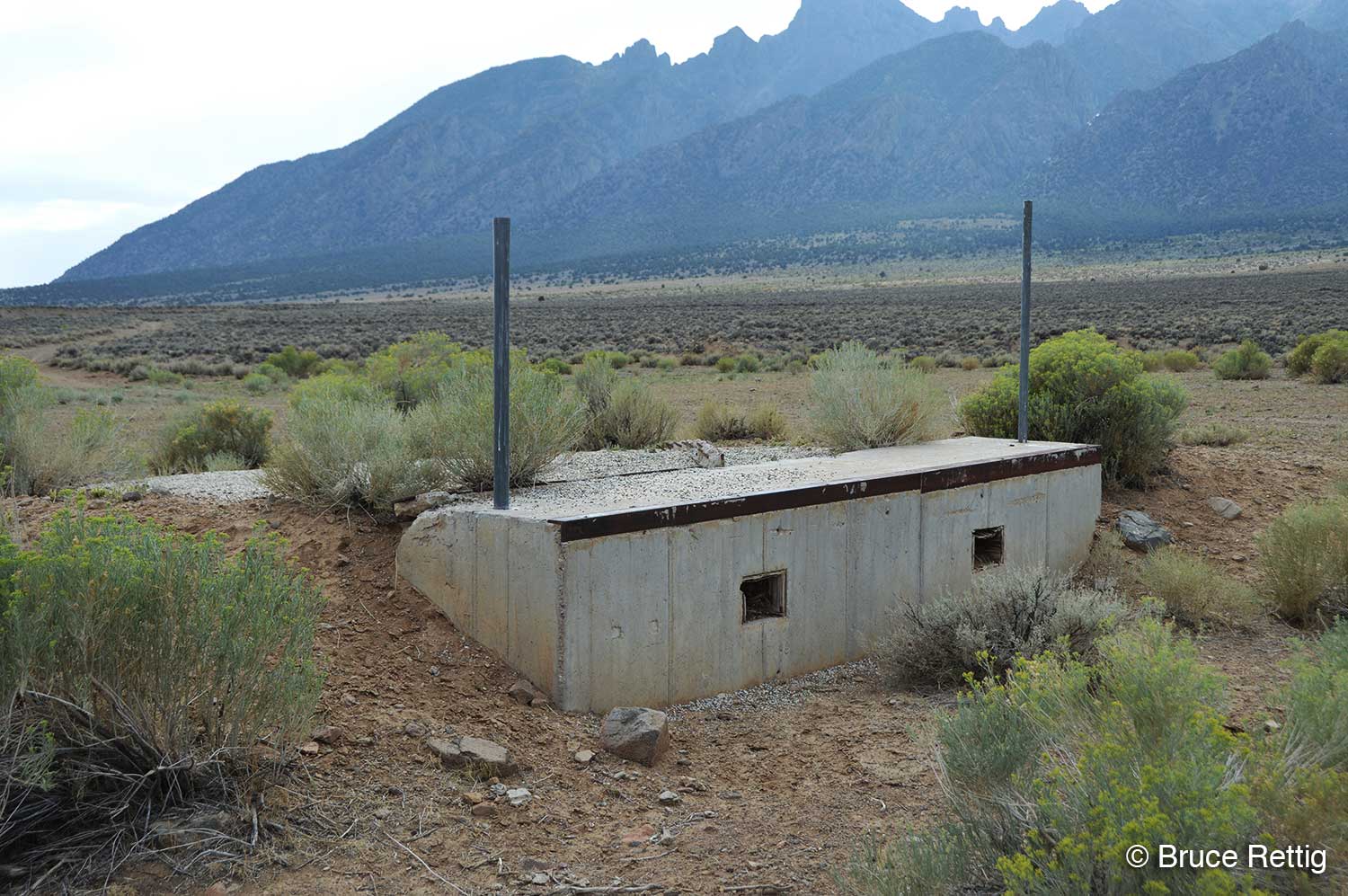 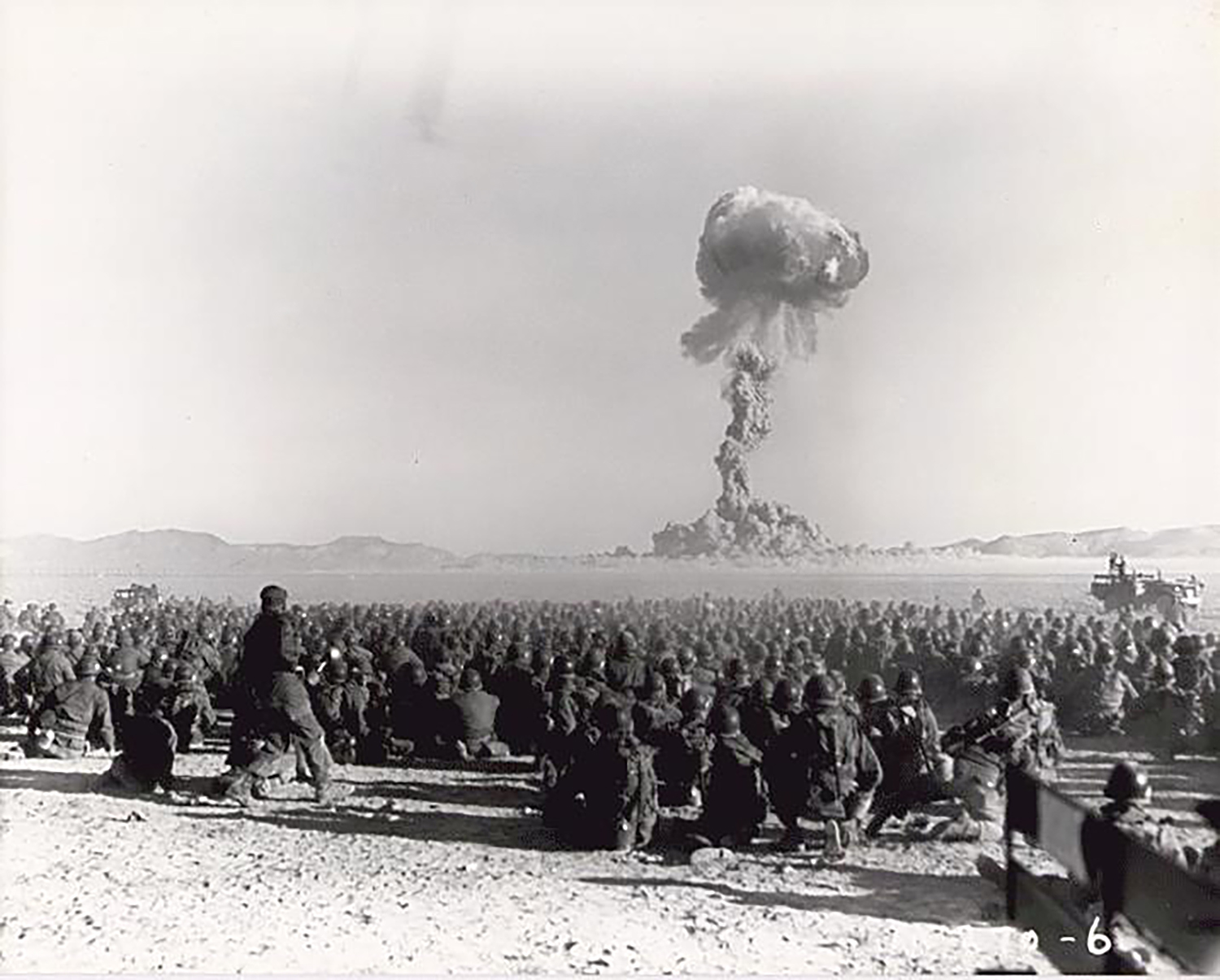 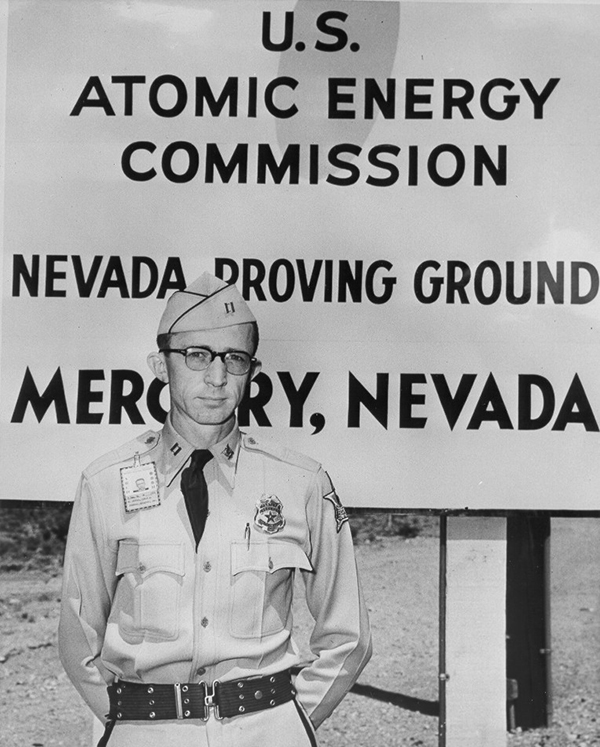 Welcome to the Nevada “Proving” Ground . . . 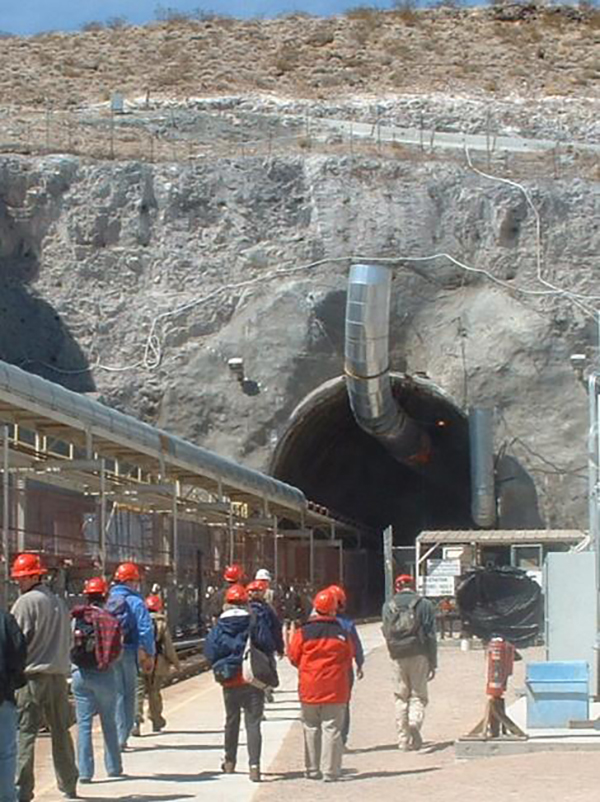 Yucca Mountain Johnny is a cartoon miner created by the United States Department of Energy (DOE) to present information to children on nuclear waste disposal and the Yucca Mountain Project.